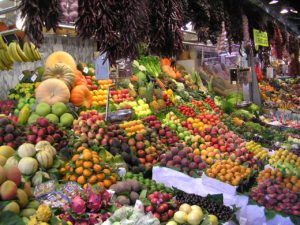 The move, which was reported on Israel’s Channel 10, was justified by an apparent decision by the Palestinian Authority to ban the sale of Israeli lamb inside the West Bank.

“We found out from Israeli farmers themselves that the Palestinian Authority was not accepting lamb”, said a spokesperson for the minister, “in violation of our agreements.”

The ministry spoke to COGAT, the Coordination of Government Activities in the Territories, a military unit which mediates between civilian and military parties in the West Bank and Gaza, which advised them to refrain from taking action.

The final decision rests with the Israeli prime minister, and Israeli security services are not in favor of the policy, according to comments made to the Times of Israel.

However, the minister’s spokesperson confirmed that the freeze was going ahead on Wednesday.

“If they abide by their agreements, we’ll resume trade,” she said.

The ministry of agriculture controls and inspects the entry of produce at checkpoints, so a ban could be easily instituted, depriving the Palestinian economy of more than $200,000 every day.

Israel is the Palestinians’ largest trading partner by far, while the West Bank only represents a small market for Israeli producers.

Israeli security services met with a Palestinian representative this week, as both parties seem to be intent on preventing any further escalation of violence.

Dr. Dai and Minister Uri Ariel (far left) present the Cohen family with a new strain of Strawberry, named after their daughter Hadar, who was murdered by a Palestinian terrorist in Jerusalem.- Photo: Volcani Institute

Uri Ariel is a parliamentarian in the National Union party, an extremist faction associated with the nationalist religious party Jewish Home.

He is one of the major government figures to support the settler movement that has put increased pressure on Netanyahu’s administration to take drastic pro-settlement measures in the West Bank.

Earlier this year, he made headlines for being one of the first people to take advantage of updated regulations allowing lawmakers to access the Al Aqsa compound in Jerusalem.

He has led groups of settlers for prayers into the compound under armed guard on at least two occasions in the last month alone, attracting the anger of Palestinian authorities.

He also called for “more deaths” during Israeli operations in Gaza, in an interview with Reshet radio in January.

Talking to i24NEWS in April this year, he said that Israel should annex Area C of the West Bank, and he defended the disputed nation state law.

“Our opinion is that the land from the Jordan River to the sea belongs to the Jews. It’s our right according to the Torah (Old Testament)”, the lawmaker said.