Tag Archive for tit for tat 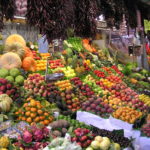 The move, which was reported on Israel’s Channel 10, was justified by an apparent decision by the Palestinian Authority to ban the sale of Israeli lamb inside the West Bank. Continue Reading »