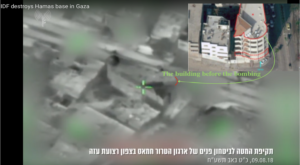 The Al Jazeera network reported on Thursday evening that an Egyptian-brokered ceasefire had been reached between Hamas and Israel and added that it came into effect at 10:45 p.m.

An Israeli source clarified, however, that the report is incorrect.

The IDF said that the building serves as the command center for Hamas’ internal security forces, which is responsible for and manages all internal security activities in the Gaza Strip. Some members of the internal security unit are also active in the military wing of Hamas and take part in armed activity against Israel.

The air strike came hours after a rocket fired from Gaza exploded in Be’er Sheva. No casualties were reported.

This is the first time that a rocket struck Be’er Sheva since Operation Protective Edge in 2014.

According to IDF data, more than 180 rocket and mortar launches from Gaza into Israeli territory have been identified since Wednesday night.

The Iron Dome intercepted more than 30 rockets. Most of the rockets exploded in open areas.