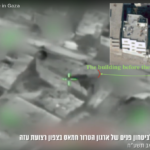 The Al Jazeera network reported on Thursday evening that an Egyptian-brokered ceasefire had been reached between Hamas and Israel and added that it came into effect at 10:45 p.m.

An Israeli source clarified, however, that the report is incorrect.