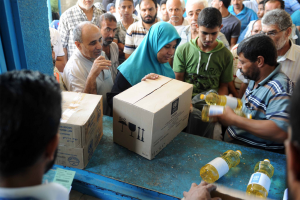 “The UK will deliver financial support to UNRWA earlier than originally planned, releasing £38.5m to the Agency which includes £10 million on top of the £28.5 million package of support announced by Minister Burt at the Extraordinary Ministerial Conference on UNRWA in Rome in March.”

“The UK aid provides Palestinian refugees, including Gazans, with vital healthcare and education,” the statement added, highlighting the early contribution in response to recent protests in Gaza as significantly straining the Palestinian agency.

“The recent violence on the Gaza border has significantly added to the burden on UNRWA’s services, and their vital work delivering food, education and healthcare has never been more critical.”

More than 130 Palestinians have been killed and many more injured in the “Great March of Return” protests that began on March 30, as thousands of Gazans have taken part in the demonstrations accompanied by clashes along the volatile border each week.

The UK announcement comes a day after the president of the UN General Assembly told a pledging conference for UNRWA that due to a more than $200 million funding shortfall for its projects this year,“services could start to be affected as early as next month. And humanitarian activities in the West Bank and Gaza are at risk.”

The UK also urged other countries to chip in “so the agency can continue its often life-saving work.”

On Monday, several countries announced new assistance, including $500,000 from Mexico and four million euros from Belgium.

“Schools may not be able to open on time in August,” Miroslav Lajcak said in the second such donors’ meeting in three months.

Previous pledging conferences saw UNRWA so far meet around half its target of $446 million for the year.

The UK statement said that its aid supports the education of 500,000 children and provision of health services to 3 million Palestinian refugees.

The agency employs more than 20,000 people in the Middle East, most of them Palestinians.

Israel has often criticized UNRWA, accusing it of perpetuating the plight of Palestinians by allowing the descendants of first-generation Palestinian refugees — those who fled what is today Israel when it was declared an independent state in 1948 — to maintain refugee status in their host countries.

For the Palestinians, the right for descendants to return to homes they either fled or were forced out of is a prerequisite for any peace agreement with Israel, but it is a demand the Jewish state has rejected out of hand.

The US relationship with the Palestinians has been terse since President Donald Trump’s December 6 declaration recognizing Jerusalem as the capital of Israel. The move sparked a new wave of unrest between Israel and the Palestinians, and called into question the US role in future peace talks.

The status of Jerusalem is among the most contentious in the Israeli-Palestinian conflict. Israel claims all of Jerusalem as its united capital, while the Palestinians see the eastern sector as the capital of their future state.