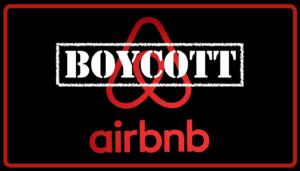 Israeli right-wing lawmakers immediately railed against the decision, urging settler homeowners to take legal action against Airbnb and threatening to limit the organization’s operations in Israel.

Strategic Affairs Minister Gilad Erdan said he planned to speak with senior US officials to see if the move violated American laws against Israeli boycotts that exist in 25 out of 50 states.

“Anti-Israel boycott organizations do not distinguish between the State of Israel and Judea and Samaria. As far as they are concerned, and have openly declared, the entire State of Israel has no right to exist,” Erdan said.

“National conflicts exist all over the world,” he said, so Airbnb “will have to explain why they specifically, and uniquely, chose to implement this political and discriminatory decision in the case of citizens of the State of Israel,” Erdan said.

Former Israeli Ambassador to the US MK Michael Oren said, “Airbnb blacklists Jewish apartments in Judea and Samaria – not Palestinian apartments, not apartments in Turkish occupied Cyprus, not in Moroccan occupied Sahara, not in Tibet or the Crimea.
“Airbnb’s policy is the very definition of antisemitism. No one should use its services,” Oren added.

“We reiterate our call upon the UN Human Rights Council to release the database of companies profiting from the Israeli colonial occupation. Israeli settlements are not just an obstacle to peace but defy the very definition of peace,” Erekat said.

The NGO took credit for the Airbnb decision, which came just days before the group was set to publish a major report on its activities in the settlements.

“For two years, Human Rights Watch has spoken with Airbnb about their brokering of rentals in West Bank settlements, which are illegal under international humanitarian law and for which Palestinian ID holders are effectively barred from entering. We urge other companies to follow suit,” Ganesan said.

Airbnb posted a notice about the policy change on its website, explaining that at issue were some 200 listings. It noted that it had wrestled with the pros and cons of the situation before coming to a decision.

“There are conflicting views regarding whether companies should be doing business in the occupied territories, which are the subject of historical disputes between Israelis and Palestinians,” the company said.

“We spent considerable time speaking to various experts, including those who have criticized our previous approach, about this matter. As a global platform operating in 191 countries and regions and more than 81,000 cities, we must consider the impact we have and act responsibly,” Airbnb said.

The company explained that it had developed a case-by-case framework that it planned to follow in situations of territorial dispute, which included consideration of whether the listing of such properties contributed to “existing human suffering” and had a “direct connection to the larger dispute in the region.”

“We know that people will disagree with this decision and [we] appreciate their perspective. This is a controversial issue. There are many strong views, as it relates to lands that have been the subject of historic and intense disputes between Israelis and Palestinians in the West Bank,” the company said.

“Airbnb has deep respect for those views. Our hope is that someday, sooner rather than later, a framework is put in place where the entire global community is aligned so there will be a resolution to this historic conflict and a clear path forward for everybody to follow,” Airbnb said.

“As of today, this is an aspirational hope. People of goodwill have been seeking this goal for decades, but we continue to hope for a durable, lasting peace,” the company added.

The Israeli NGO Peace Now said, “Even if the Green Line is invisible to Bibi [Prime Minister Benjamin Netanyahu] and [Education Minister Naftali] Bennett, the rest of the world distinguishes between Israel and the occupied territories.

“Airbnb is still choosing to support our economy, just not the government’s controversial pet settlement project,” Peace Now said.
Legal expert Eugene Kontorovich said that the decision had nothing to do with a moral stance.

“This is not about disputed territories, as Airbnb has listings in Moroccan-occupied Western Sahara, Turkish-occupied Cyprus, and more. So it is only Jewish properties in the Jewish homeland that are banned.” Kontorovich is Director of International Law at the Jerusalem-based Kohelet Policy Forum.

Efrat Council head and YESHA foreign envoy Oded Revivi said the decision went against the very essence of the company’s open-door global understanding of the importance of a platform that allows people to cross borders and meet each other.

Tourism Minister Yariv Levin said that he ordered his office to “formulate immediate measures to limit the company’s activity throughout the country.”

He also instructed his ministry to “implement a special program to encourage tourism and accommodation in vacation apartments throughout Judea and Samaria.”