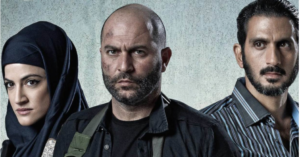 Clennon, who appeared on the series Weeds as a dying man who allows his wife to have lovers, said on the TruthOut.org website on August 7 that he was initially enthusiastic about auditioning for the role in Sycamore (previously titled Hit and Run), because “the role of Martin Wexler, a series regular character described as an American politician, living in New York – approachable, distinguished, practiced and elusive” intrigued him, and because he had not worked for over a year.

The series, which Raz and Issacharoff are creating along with Dawn Prestwich and Nicole Yorkin, creators of the Amazon comedy Z: The Beginning of Everything, was described by Deadline as the story of a “happily married man whose life is turned upside down when his wife is killed in a mysterious hit and run accident.”

But upon learning that the series would be produced by the Fauda creators, Clennon felt compelled to decline the audition and to write about this decision: “I believe the Academic and Cultural Boycott of Israel is of special importance, and I admire the professors and artists who have refused to lecture or to perform in Israel. Through their refusal, they have denied Israel the legitimacy and the prestige it seeks in the world community.”

Towards the end of the piece, Clennon admitted, “My refusal to collaborate with Israeli producers will have a negligible effect on this expensive and ambitious project.”