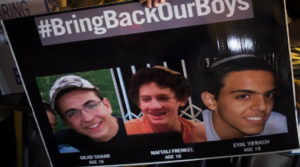 In a worrying turn of events, a US district court this week seemed to at least partially agree with the Palestinians on this matter.

A district court in Washington, DC ruled that the parents of a murdered Israeli teen could indeed sue Iran and Syria for providing material support to the Palestinian terrorists who carried out the grizzly deed, but that the amount of compensation awarded would be relatively low.

The reason? Because, in the words of Judge Rosemary Collyer, “the plaintiffs took on themselves the risks of living beyond Israel’s Green Line and sending [their son] another 40 km into the West Bank to a high school in Gush Etzion.”

The boy in question was 16-year-old Naftali Fraenkel, who was abducted and executed along with two friends, Eyal Yifrah and Gilad Shaar, when they inadvertently hitched a ride with Hamas terrorists in June 2014. Judge Collyer continued by noting that the boys were targeted “because they were Jewish and Israeli youths,” as though this were somehow an acceptable argument in lowering the damages.

Fraenkel’s parents, Racheli and Avi, admitted they didn’t expect to actually win any money from the case, since neither Iran nor Syria was likely to actually pay, but nevertheless wanted to make a statement by demanding a whopping $341 million.

In the end, it was Judge Collyer who made the biggest statement by limiting the damages to $4.1 million.

This is problematic for a number of reasons, but a few really stand out.

First, the ruling, like so many other aspects of the failed peace process, paints the Palestinian Arabs as violent by nature, that such attacks are all that could be expected of them. While many Israeli victims of terror might agree with that characterization, it’s the very stigma Western peace brokers are trying to break, so it seems odd for a judge to be reinforcing that negative image.

The ruling also takes another step toward a very slippery slope that would negate certain violent crimes based on where they took place. If Jews can’t live in the West Bank without waving their right to security, then eventually one might argue that a white family murdered in gang-infested Compton or a black man killed in a Ku Klux Klan stronghold in the South had done the same.

Lastly, this is the very kind of ruling that ends up putting peace even further out of reach.

For Israelis, the primarily stumbling block to a genuine peace agreement is the failure to eradicate Palestinian terrorism and incitement. And by partially justifying the murder of Jews for daring to step foot on land claimed by the Palestinians, this judge has (no doubt unintentionally) encouraged the Palestinian Authority to maintain hard-line positions that no Israeli government can ever accept.