Bucking convention from his village of Arara, Yousef Juhja sent three sons to join the IDF—and one paid the ultimate price.

Yousef Juhja’s cell phone number ends, coincidentally, with the digits 1948. It’s the year of his birth and that of the Jewish state—and for most of Juhja’s fellow Israeli Arabs, the year of the Nakba, the catastrophe of national dispossession and the dispersion of their Palestinian kin. 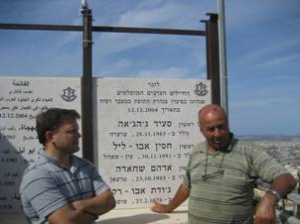 Standing by the Memorial: Yousef’s son Sa’id fell in the line of duty, blown up by explosives packed in a tunnel dug by Palestinian terrorists under a sentry box in Rafiah, Gaza in December, 2004. – Photo & caption: Lydia Aisenberg

But Juhja is an outlier in Arara, his hilltop village in the politically volatile Wadi Ara valley, and among the broader Israeli Arab community. That’s because he sent three sons to the Israel Defense Forces—a rare and deeply unpopular choice made by just a few dozen Arab youth every year.

“I sent three of my boys to military service with full conviction,” Juhja tells me over muddy coffee and cigarettes in his home. “For an Arab, sending one’s sons into the army is a brave decision. I’m a trailblazer.”

In 2004 one of those sons, 19-year-old Staff Sgt. Sa’id Juhja, paid the ultimate price for the Jewish state when he was killed in a bomb attack in Gaza. Shortly after, the bereaved father built a memorial to his son and seven other Arab soldiers killed in uniform over the years. The site—built on Juhja’s own initiative, property, and dime—is the only one of its kind in Israel.

The memorial is housed in a modest red-roofed edifice adjacent to Juhja’s home. Two large Israeli flags fly at its entrance, and inside an even bigger one stretches along the back wall facing a vista of stony, undulating terrain. On the side wall are marble memorial plaques—in Hebrew and Arabic—for eight soldiers, Muslim and Christian, killed between 1989 and the present. Juhja says he plans to add additional plaques if, “God forbid,” he hastens to add, the list of fallen Arab soldiers grows.

After years of bureaucratic wrangling, the plaques were finally paid for in 2010 by the Defense Ministry. The ministry also agreed to recognize the site as an official monument and to reimburse Juhja for 50 percent of the cost of its construction. Still, Juhja fears he may not be long for this world—life expectancy for Israeli Arab men is 75, but the 64-year-old is a chain smoker—and he doesn’t expect his five surviving sons or the Arara local authorities to keep the memorial running. He wants the ministry to take full control of daily operation and is contemplating extreme measures to make that happen.

“I and the other bereaved Arab fathers whose sons are commemorated here are considering waging a hunger strike outside the Defense Ministry,” Juhja says. “The ministry has gone AWOL.”

Arara is a village of 16,500, perched five kilometers from the Green Line separating Israel proper from the West Bank. Juhja says he welcomes around 50 visitors to the site weekly, but at present the path leading to it is too narrow for a bus. To allow bus access, he says, an electrical pole would have to be relocated at a cost of 26,000 shekels, or $6,700.

“For three years the ministry was making promises and calling committee after committee,” Juhja says. “Finally, this summer they told me there have been budget cuts, and they don’t know where they’d be able to get the money. In the meantime, I’m paying for everything: electricity, water, cleaning, even the chair you’re sitting in.”

The ministry, for its part, believes it’s done more than enough for Juhja, who built the memorial of his own volition and without having consulted the relevant authorities. “The Defense Ministry is tasked solely with maintaining national and brigade-level memorial sites. There are 24 such sites, such as [Jerusalem’s] Ammunition Hill and the Golani Brigade memorial,” a ministry spokesperson wrote me. “Still, the ministry deemed it appropriate to assist Mr. Juhja—ex gratia and on an unprecedented scale—in establishing a site to commemorate his son and additional fallen soldiers from the Arab community.”

Arabs, like most ultra-Orthodox Jews, are legally exempted from Israel’s mandatory conscription, though almost all male Druze (an Arabic-speaking community following an offshoot of Shia Islam) enlist, and 5 to 10 percent of Bedouin males volunteer, many as scouts and trackers. A memorial exists for fallen Bedouin servicemen and two for the Druze, but until Juhja’s initiative, no similar site existed for other Arab soldiers killed in uniform.

For decades, these wholesale community-based exemptions from military service have rankled mainstream Jewish Israelis. That arrangement, generally known as the Tal Law, expired this summer, and raucous national political debate ensued over whether ultra-Orthodox should be forced to complete IDF or nonmilitary national service. Prime Minister Benjamin Netanyahu’s Likud party and Foreign Minister Avigdor Lieberman’s Yisrael Beiteinu have gone further, pushing proposals to include Arabs in mandatory military or civilian service as well.

That prospect is unlikely. Arab citizens of Israel have an equivocal, some would say almost schizophrenic relationship with the state, its symbols, and the majority Jewish population. Israel’s Arabs, some of whom identify as “Palestinians living in Israel” or even “1948 Arabs,” pepper their speech with Hebrew and balk at the prospect of marrying their West Bank brethren. But polls show 40 percent share the view—pervasive in the Arab world—that Holocaust history is fabricated.

A still greater proportion of Israeli Arabs see Zionism as imperialism, or worse, as a latter-day Crusade. Last year, an authoritative annual poll conducted by the University of Haifa’s Sammy Smooha found six in 10 Israeli Arabs said Israel has no right to exist as a Jewish state, and a similar proportion said Jews are a foreign imprint on the Middle East, destined to be replaced by Palestinians.

This year’s poll painted a slightly less grim picture: Six in 10 Israeli Arabs accept the country as a Jewish and democratic state, but an equivalent number described that situation as unfair. And while seven in 10 said the government treats them as second-class citizens, a similar proportion said they prefer to live in Israel over any other country.

While in the immediate aftermath of Sgt. Juhja’s death, scores of soldiers, ministry officials, and even Israel’s then-president Moshe Katsav paid calls to the house, few of Arara’s residents attended the funeral, and some shop owners refused to give the grieving father service. A number of Knesset members have since visited the memorial—but none have been Arab.

When I ask Juhja how he has the strength to stand his ground in the face of his community’s near-universal hostility, he waves away the question: “I have my own philosophy,” he says. “As for religion, I’m devout in my own way. I thank God he gave me a brain to think, and eyes to see you with. That’s religion to me. Does God want us all to kill each other? I don’t think so.”

But Juhja’s biography is exceptional and may help explain his determination to integrate into Israel’s Jewish mainstream. At 14, after finishing his schooling—Arara had no high school at the time—he left the village to work with his father, a poor farmer, to clear the shrub land near Tel Aviv where Ramat Gan’s Diamond Exchange now sits. Within a few years he had found employment in gardening and maintenance at the home of Ramat Gan’s longtime mayor Avraham Krinitzi, living with the family and being treated, he recalls, as one of its own. When, at 22, Juhja chose to get married, dozens of families from Ramat Gan traveled to Arara for the celebration.

Juhja’s cousin, a man in his 40s who asked to remain nameless, is, like most Arara residents, opposed to Arab enlistment. Unlike them, however, he has not shunned his bereaved relative, and even holds out the possibility of one day fitting out his own sons in green.

“It’s true, Yousef broke new ground. He went against the ‘street’ of Wadi Ara and the whole area. That’s rare courage,” his cousin tells me. “I’m proud that I’m an Israeli citizen and that I live in the state of Israel, but I feel constant discrimination. There are huge gaps between the Jewish and Arab communities on every level.”

“I go to Tel Aviv and hear ‘Death to the Arabs.’ Then I go into the [Palestinian] territories, and I’m treated as if I’m half a Jew,” he says. “If peace comes in another 10 or 15 years, and if I’m given my rights and made to feel like I belong, I’ll be the first to send my sons to enlist.”

“You are a minority. Every minority in the world suffers to a certain extent—some more, others less. But you have to express your frustration in an organized, democratic way,” he says. “For the past year and a half, young people in Tel Aviv have protested over the lack of housing. If you want to protest discrimination, do so within the framework of the law.”

Lighting another smoke, Juhja turns to me and cuts to the heart of the matter. “I’m not a citizen of Jordan, Lebanon, Turkey, or even the Palestinian Authority,” he says. “I’m a Muslim-Arab Israeli. I received Israeli citizenship the moment I was born.”