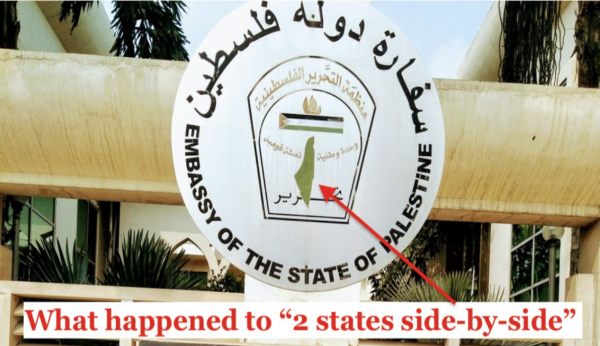 Both Hamas TV and Palestinian Authority TV, lead by Abbas teach hatred and the incitement maintains the status quo: violence….which generates $US in the billions.

In July 1922, the League of Nations, predecessor to the UN, formally adopted the British Mandate for Palestine — a legally binding document that was approved by all 51 members of the League of Nations. It agreed that: “the Mandatory [Britain] should be responsible for putting into effect the declaration originally made on November 2nd, 1917 [Balfour Declaration], by the Government of His Britannic Majesty, and adopted by the said Powers, in favor of the establishment in Palestine of a national home for the Jewish people…” And it gave recognition to: “the historical connection of the Jewish people with Palestine and to the grounds for reconstituting their national home in that country.”

So, to all the anti-Semites who propagate the myth that the Jewish State was established out of the ashes of the Holocaust, they should learn Israel’s legal basis to sovereignty was already cast in international law before the war.

Two major ‘events’, concerning Israel’s size, has happened since. – Firstly, 80% of the designated land was given to the Arabs & the Bedouin, by Great Britain, which today is called Jordan. Then, with the Jews having to defend its sovereignty in 1948, Israel lost Judea & Samaria, including Jerusalem “the historical connection of the Jewish people”… land that was RECOGNIZED back in 1917 by Lord Balfour, as being the Jewish national home.

As it is well known, it took 19 years before the forfeited land in 1948 was returned after the defensive ‘6 Day War’ of 1967.  What isn’t so well known, was then, the “Palestinians”, who haven’t been thought about for 2 decades since Israel’s birth, were actually the Jews, now called Israelis. The Arabs who had been living in Jordan were simply Arabs, nomads, who had moved there in the years prior to Israel’s independence, to work for the Jews & British, seeking a better life for themselves. Jews Have a Fine Fighting Force
Make Up for Lack of Arms with Undying Spirit, Unparalleled Courage — Impress the World
By Robert Kennedy, June 4, 1948

Robert Kennedy, writing for The Boston Post a month before the 1948 war, wrote in his dispatch, “The Jews point with pride to the fact that over 500,000 Arabs, in the 12 years between 1932-1944, came into Palestine to take advantage of living conditions existing in no other Arab state…”

Those very Arabs moved into the Jewish homes in Jerusalem, took over farms & business alike, throughout Judea & Samaria when Jordan captured the land of the Jews in 1948, turning it ”Judenrein” (free of Jews) until June 1967.

So, today, with the applications of Taqiyya and 45 years of Goebbels-like propaganda, the world has accepted a revisionist history including certain fallacies i.e. the ‘Palestinians’ and  ‘Occupied territory’.

The Palestinian Authority (PA) was formed in 1994, pursuant to the Oslo Accords between the Palestine Liberation Organization (PLO) and the government of Israel. Remember, for this is crucial, it’s the PLO that is the authority, strength, and power behind anything seen as “Palestinian”, for it’s the organization founded with the express purpose of creating an independent State of Palestine. It is legally recognized as the “sole legitimate representative of the Palestinian people” in the UN & by over 100 states with which it holds diplomatic relations. The PA should not be confused with the PLO who continues to enjoy international recognition as the sole legitimate representative of the Palestinian people, representing them at the United Nations under the name “Palestine”.

According to the 1993 Oslo Accords, the PA was designated to have exclusive control over both security-related & civilian issues in Palestinian urban areas (referred to as “Area A”) and only civilian control over Palestinian rural areas (“Area B”). The remainder of the areas, including Israeli settlements, the Jordan Valley region & all bypass roads between Palestinian communities, were to remain under Israeli control (“Area C”).

On January 9, 2009, when Mahmoud Abbas’ term as President was supposed to have ended & new elections were to have been called, Hamas supporters and many in the Gaza Strip have withdrawn recognition for his Presidency.

So, since 2009, Mahmoud Abbas is no longer an ‘elected President’. But, as Chairman of the PLO, he is still recognized “as the sole legitimate representative of the Palestinian people” by the international community…but NOT by his own people, who see him as a dictator.

By the way, Hamas has yet to become a member of the PLO.

Who are the Gazans? Fathi Hammad, Hamas Minister of the Interior and of National Security said (speaking in Arabic….not to the ‘infidel’) on Al-Hekma TV (Egypt) broadcasted: March 23, 2012: “We all have ARAB roots, and every Palestinian in Gaza and throughout Palestine, can prove his Arab roots – whether from Saudi Arabia, from Yemen, or anywhere” “Half of the Palestinians are Egyptians and the other half are Saudis” “Who are the Palestinians? – We are Egyptians! – We are ARABS! – We are Muslims! – We are a part of you!”

Israel’s disengagement from Gaza was proposed by then PM Ariel Sharon, adopted by the Knesset on June 6, 2004 & enacted in August 2005. With the exit of the IDF and every Jewish citizen, Gaza was left to the Palestinians in the hope that self-determination would allow the Gazans to exploit this ‘freedom’, enact a government, and become a blossoming entity, as the Jewish Israelis had previously enjoyed.

Instead:  Following the 2006 Palestinian legislative election & the Hamas coup d’etat in 2007, Hamas has functioned as the de facto ruler of Gaza, forming an alternative religious government in Gaza.

To date, Israel has had over 30,000 rockets and mortars fired onto its civilian population from Hamas controlled Gaza.

According to European Court of Auditors in 2013, the EU ‘lost’ 1.95 billion euros (over $2 billion) in Gaza, with a ‘Soprano’ style work force where 1 in 5 Gaza’s receiving EU salaries don’t actually work.

Israel’s right, religious & secular feel that too much of the homeland has been ‘stolen’ by the Arabs, and would rather fight than lose more. Biblical, historical and legal arguments support their contention to not relinquish additional land. They add that the aftermath of the disengagement from Gaza exhibits ample reasons of warning, should that experience be considered again.

A continuous Jewish presence existed in Hebron until 1929 when 67 Jews were murdered. The remaining Jews were forced to flee. Far-left organizations touring Hebron don’t mention this

Israel’s left feels the existence of millions of Arabs…calling themselves Palestinians, and demanding independence needs to be addressed. The amount of hatred and daily acts of violence against Israeli Jews have worn them down, and see the ‘loss of land’ as a fair price for peace.

The government, past and present ones, have always said that Peace was an imperative, having had every PM seeking a resolution. The result always ended the same: Arab leaders rejected a final peace agreement.

It doesn’t matter if it’s Yasser Arafat at Camp David in July 2000 with PM Barak, Abbas in Aug. 2008 with PM Olmert, or again Abbas with PM Netanyahu in 2014; all attempts at peace ended the same way.

Even PM Sharon, having Knesset approval to completely evacuate every last Jew from Gaza (soldier & civilian), AND dismantling 4 Jewish towns in the northern ‘West Bank’, was forced to send a letter to U.S. President George W. Bush, stating that “there exists no Palestinian partner with whom to advance peacefully toward a settlement”.

Status quo for the Arabs

The inbreeding of hate for the past 30 years, along with a revisionist history being pounded into the heads of Palestinian children have turned them into killing machines, prepared to slaughter every Jew to liberate Muslim land. Every logo belonging to the different Palestinian organizations depict Palestine encompassing all of Israel. This is also true in all schoolbooks.  The talk of “2 states for 2 peoples” is rhetoric, not manifested in anything other than debate in ENGLISH.

As long as hate and a false history in saturating their existence, the struggle will continue; insofar as any ‘talks of peace’ are automatically dismissed as unrealistic and a waste of time, or contrary to religious doctrine, “2 states for 2 peoples” is an unrealistic conclusion.

As long as the ‘armed struggle’ is glorified and revered, the calling to the religious Jihad against Israel’s Jews will continue as routine.

If the PA continues to guarantee life-long payments for acts of violence (aka ‘Pay to Slay’), increasing with degree of severity, many will continue to answer the call, planning murders, to receive huge monthly payments while incarcerated by the Israelis. It is estimated that the PA pay roughly $350 million a year to prisoners, their families and pension to those released, along with large bonuses when actually released. 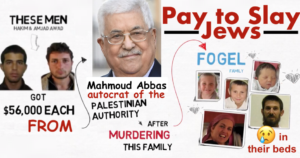 The Palestinian leadership and their families see no financial incentive to change the status quo. Just like Arafat, Mahmoud Abbas and his sons are all multimillionaires. This is now true with the leadership of Hamas, who have been very generous to family & friends, paving the way for 1700 millionaires in Gaza.

For those who are ‘running the show’, the pay, and lifestyle will never be better. There’s no dishonor robbing the fools who keep giving them millions when they know full well, where it really goes.

An EU report reveals extensive & widespread Palestinian corruption as €1.95 billion, transferred by Belgium to Abbas’s PA in the West Bank and to Hamas’ Gaza Strip over past several years, were wasted or ‘lost’. AND THAT DOESN’T INCLUDE THE US DOLLARS GIVEN!

The kleptocratic autocrats of both Hamas and the Palestinian Authority have  indoctrinated and exploited the Arabs to never make peace, never abandon their dreams of a Palestine ‘from the River to the Sea’, and they pay them well to persist and maintain the never-ending status quo of ‘resistance’ against the Jews. 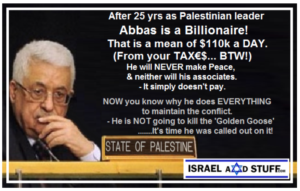