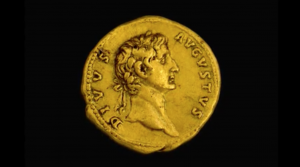 The Israel Antiquities Authority and the Israel Nature and Parks Authority announced Monday that it believes the objects found were part of a ceremonial offering that was laid in the center of the structure being excavated.

The trove was found in a pot made of china which was wrapped in fabric that was sill somewhat intact despite the humid climate.

Five artifacts were found in the trove, three of which had greatly corroded, preventing researchers from study them properly.

Medallion consisting of a Silver disc with an engraving of a Eight pointed star. – Photo: CLARA AMIT:IAA

The remaining two items included a medallion consisting of a silver disc with an engraving of an eight-pointed star. At the edge of the disc are two horns meant for connecting with a rope. Dr. Irit Tziper said these symbols are recognized as representing Canaanite gods comparable to Mesopotamia’s god’s Ishtar and Sin of Akkadian culture.

The second artifact found was an Egyptian seal from the Hyksos period framed in gold.

The trove of findings led researchers to believe it was part of an offering meant to connect the two gods, Mesopotamia/Canaanite and Egyptian.

“Gezer was one of the most important cities in the Land of Israel during the Canaanite period,” said Shaul Goldstein, director-general of the Israel Nature and Parks Authority,  “it’s importance continued through the period when King Saul rebuilt the city. The trove found is a significant accomplishment that shines a light on the Canaanite  culture in Israel 3,600 years ago.”