‘And… you’re out!’ – Human Rights Watch director deported from Israel 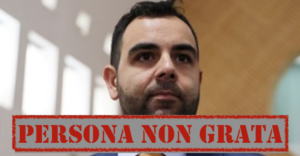 Regional director of Human Rights Watch, Omar Shakir, vows to continue fighting Israel’s “systematic repression and institutional discrimination”…but, not from the Jewish State, having exhausted all his court options.

The regional director of Human Rights Watch in Israel has vowed that he will retain his position and continue to manage the HRW branch in Israel even after his planned deportation Monday.

Omar Shakir, who has led HRW’s operations in Israel since October 2016, is set to be expelled from the Jewish state Monday, over his support for the anti-Israel Boycott, Divestment, and Sanctions (BDS) movement.

Earlier this month, the Israeli Supreme Court upheld a lower court’s decision permitting the Interior Ministry to deny Shakir’s request for extensions to his residency and work visas.

In so doing, the court rejected Shakir’s appeal against the lower court decision.

The Human Rights Watch had denied that either it or Shakir had endorsed the BDS movement, though the Jerusalem District Court accept the government’s claims that Shakir had in fact worked to promote the BDS movement’s agenda. Human Rights Watch has in the past urged companies not to do business with Israeli corporations which operate in Judea and Samaria, saying that to do so would make them complicit in human rights abuses.

Despite his impending expulsion, Shakir said that he would continue to work as regional director of Human Rights Watch, moving his office to a neighboring country.

In an interview with AP, Shakir accused Israel of “systematic repression and institutional discrimination”.

“We’re talking about a half-century-long occupation defined by systematic repression and institutional discrimination,” said Shakir. “That requires important, urgent work, and it’s unfortunate that I won’t be able to do it on the ground, but we won’t stop doing it.”