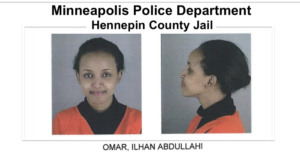 According to the complaint filed with the ethics office, there is “substantial” evidence that “Rep. Ilhan Omar may have committed the following crimes in violation of both federal law and Minnesota state law: perjury, immigration fraud, marriage fraud, state and federal tax fraud, and federal student loan fraud.”

The complaint stems in part from reports that Omar may have entered into a fraudulent marriage with her brother, enabling him to immigrate to the US.

In addition, Omar has been accused of filing joint tax returns in 2014 and 2015 with someone, while being married to another man, Ahmed Hirsi.

The Judicial Watch complaint also cited of state campaign finance law violations by Omar “for improper use of campaign funds”.

After being found guilty of violating campaign finance laws, Omar was ordered by the Minnesota Campaign Finance Board last month to reimburse her own campaign to the tune of $3,500, plus a $500 fine.

Tom Fitton, president of Judicial Watch, speaks on radio Wednesday with Glen Beck, breaks down the details of the formal complaint his watchdog group filed against Minnesota congresswoman Ilhan Omar with the House of Representatives Office of Congressional Ethics.