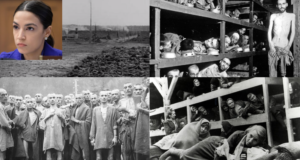 During a Twitter row with Republican Rep. Steve King, Ocasio-Cortez, who was encouraging her to go on the trip, the democrat representative responded that “I’m going to have to decline your invite.”

“The last time you went on this trip it was reported that you also met w/ fringe Austrian neo-Nazi groups to talk shop,” she tweeted “So I’m going to have to decline your invite. But thank you for revealing to all how transparently the far-right manipulates these moments for political gain.”

The last time you went on this trip it was reported that you also met w/ fringe Austrian neo-Nazi groups to talk shop.

So I’m going to have to decline your invite. But thank you for revealing to all how transparently the far-right manipulates these moments for political gain. https://t.co/TQkaPEESoD

Responding to Ocasio-Cortez’s decision, Mosberg, who survived both Płaszów and Mauthausen, told The Jerusalem Post that “at 93-years-old, like most survivors, I won’t be able to go on these trips for much longer.”

“Now is an opportunity that won’t repeat itself, where one can visit German-Nazi concentration camps with a witness of these atrocities,” he continued. “This is the last generation that will be able to speak and learn from survivors.”

Both Mosberg and From the Depths founder Jonny Daniels said it was a shame that Ocasio-Cortez had declined the trip.

“It’s a unique opportunity, we’ve brought 100 international parliamentarians and they have left with a deeper level of understanding,” Daniels told the Post. “AOC is clearly not well educated [in this matter], she is ill informed and [the comparison] misplaced.”

“We hope she will reconsider,” he said, adding that From The Depths will continue to bring parliamentarians from all walks of life – the Left, Right, bi-partisan, Democrats and Republicans.

Daniels explained that denying basic facts of the Holocaust is akin to Holocaust denial, and said that it’s up to this generation, who has witnessed and heard the testimonies of Holocaust survivors, to pass on this information.

“If we don’t pick it up and take care of it, it will be forgotten,” he added.

Despite her “historically inaccurate comparison,” Daniels said that her comments have created dialogue and discussion about concentration camps, “which is a good thing… not to say that it was not a shocking statement,” he added.

Any imbecile can Google ‘concentration camp’ to know what the term means. – Google

“Many of her followers may not have heard of concentration camps,” he said, adding that this would encourage people to look for information. “Pushing her to respond was crucial, we’ve done something good here.”

“All debate is crucial and important,” Daniels concluded, urging Ocasio-Cortez once more to reconsider.

She loves all the int’l coverage she gets when attacking Jews,
protecting & defending anti-Semites,
and belittling the suffering & deaths
of millions of murdered Jews during the Holocaust.

She thrives on the attention & is sustained by the meanness.
AOC has been caught speaking on subjects she knows little to nothing.
She’s cunning &conniving… and rotten to the core, never ‘righting any wrongs’.
She’s just another unapologetic Holocaust belittling Democrat!
…and any Jew who supports her, or her political party that protects her
and her ilk is a fool. – IMHO