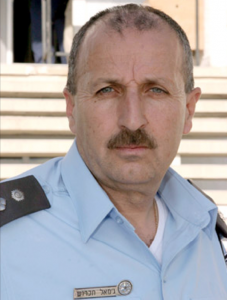 Israel made history once again when Internal Security Minister Gilad Erdan announced Jamal Hakroush is to be promoted to the rank of Deputy Commissioner and is to set up new Arab branches of Israel Police.

Israeli history is about to be made once again, and this time by Internal Security Minister Gilad Erdan (Likud).

Erdan intends to establish an executive administration that will be tasked with enforcing law within the Arab sector and to do that the executive will need to enlist Arab police officers into the Israeli police force.

At the head of the executive will be Assistant Commissioner Jamal Hakroush, who will be promoted to the rank of Deputy Commissioner for the appointment.

Hakroush’s appointment, which has been agreed upon by Erdan as well as Police Commisioner Roni Alsheikh, will send a message to the Arab population as well as endowing the new executive with the authority he will need to gather new officers and establish the new police stations and branches needed to fulfill the task he has been given, one of which is to get more Muslims to enlist in the Israeli police force.

The initiative is currently awaiting approval by the Finance Ministry and the Prime Minister’s Office. Erdan recently submitted a proposal which requires the enlistment of an additional 1,300 police officers for the establishment of this new branch, which will take approximately three years to be established.

Hakroush currently serves as the Deputy Chief Officer of the Coastal police district. He is the first Arab-Muslim to receive the rank of Assistant Commissioner, and also the first to serve as a deputy chief officer. He joined the Israeli police force in 1978 and served in numerous roles throughout his time on the force, among which were commander of the Afula and Nahariya police stations. Hakroush served as the deputy commander of the Coastal District from 2010, and was in that position during the Carmel forest fire.

During a special committee meeting in the Knesset which took place on February 9th as part of “Salute the Police Day” Alsheikh presented the Internal Affairs and Environment Committee with statistics on Arab crime in Israel.

Alsheikh told the committee that the situation is “unprecedented and cannot continue. Those who suffer the most are the Arab citizens of Israel. There is a deep desire among the Arab population to increase the amount of police activity and protection.”