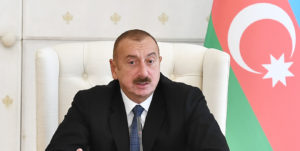 Rabbi Marc Schneier , who met with Aliyev in Baku, said the Azerbaijani leader told him – without going into names – that officials from Saudi Arabia, the United Arab Emirates, Afghanistan and Pakistan “are looking for his guidance on how to navigate being a Muslim country committed to Islam, and at the same time reaching out and supporting Israel.”

Schneier quoted Aliyev as saying that he told the officials that it is possible to “do both, that you are not going to get punished – he used those words – that you can find the right balance, and that the fact that I am being asked about this is indicative of a certain movement of the Muslim world now toward Israel.”

Schneier said Aliyev did not provide specifics about the identity of the officials he was referring to.

According to Schneier, of the 57 Muslim countries in the world “there is probably no greater paradigm of support for Israel than Azerbaijan,” and as a result of that the country is seen by other Muslim states as an example of how to conduct bilateral ties with Israel.

Prime Minister Benjamin Netanyahu, who visited the country in 2016, speaks often about discreet ties that Israel now maintains with a number of key Arab countries in the region.

Azerbaijan, which is situated on Iran’s border, is a key strategic partner for Israel, selling the Jewish State some 40% of its oil, and being one of the world’s largest markets  for Israeli arms.

Schneier, who heads an organization fostering inter-religious understanding called the Foundation for Ethnic Understanding, said that Aliyev also expressed concern about rifts between pro-Israel Evangelical Christians in America and Muslims, and is sponsoring a first-of-its-kind survey his foundation will carry out gauging the attitudes of the two committees toward one another.

Schneier estimated the world’s Evangelical community at some 650 million people, and put the number of Muslims in the world at 1.6 billion. In the US there are an estimated 63 million Evangelicals,  compared to some 3.5 million Muslims.

Asked why the Azerbaijani leader is interested in this issue, Schneier said the country is a leader in “interfaith dialogue,” and Aliyev is interested in ways to bring Islam closer to the west, “to close the gap.”