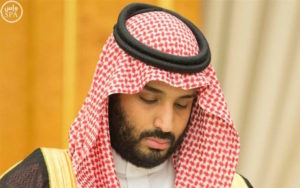 “A prince from the Royal Court visited the country in secret over the past few days and discussed the idea of pushing regional peace forward with a number of senior Israeli officials,” the IBC reported, citing the Russian Sputnikmedia outlet.

Both Israeli and Saudi foreign ministries refused to comment on the report.

The report came a day after Prime Minister Binyamin Netanyahu claimed that relations between Israel and the Arab world were better than ever before in Israel’s history.

“What’s happening now with the Arab bloc states has never before happened in our history – even when we signed agreements,” said Netanyahu.

“What we have now is greater than anything else during any other period in Israel’s history.”

The IUVM Online report cited a United Arab Emirates intelligence officer, who claimed that bin Salman was the member of the Saudi royal family who met with Israeli officials in last week’s secret meeting.

The Emirati official claimed that the visit, which focused on plans to reboot the moribund negotiating process between Israel and the Palestinian Authority, was a result of growing pressure on the Saudi government to recognized Israel.