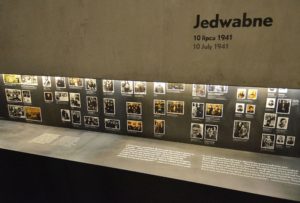 The nationalist Polish League Against Defamation organization filed a lawsuit on Friday against the Argentinian daily Pagina 12’s website, which it says used a photo of post-Second World War Polish resistance fighters in a December 2017 article about the 1941 Jedwabne pogrom.

The pogrom saw at least 340 Jews from the small Polish town of Jedwabne and surrounding areas massacred by their Polish neighbors on July 10, 1941.

According to the Polish League Against Defamation, the Buenos Aires-based Pagina 12and journalist Federico Pavlovsky’s actions were “intended to harm the Polish nation and the good reputation of Polish soldiers.”

“By issuing such a statement, the publisher showed great historical ignorance for which he should officially apologize to all Poles,” the Polish League Against Defamation said. The group did not address whether the law can be applied retroactively to cover an article published prior to the legislation coming into force.

The new legislation makes it a crime to say that the Polish nation was responsible or co-responsible for crimes committed during the Holocaust, an offense punishable by a fine and up to three years in prison.

The law, which remains subject to review by Poland’s Constitutional Tribunal should its public prosecutor’s office attempt to press charges, has led to an unprecedented crisis in relations between Israel and Poland.

Foreign Ministry director-general Yuval Rotem said Thursday that preserving the memory of the Holocaust is of greater importance than maintaining good diplomatic ties with Warsaw.

“Preserving the memory of the Holocaust is a matter beyond the bilateral relationship between Israel and Poland. It is a core issue cutting to the essence of the Jewish people,” he added.

On Monday, Polish Ambassador Jacek Chodorowicz told a Knesset committee that the new law will not be enforced anytime soon.

Core exhibition at the Museum of the History of Polish Jews in Warsaw. A part of the Holocaust gallery dedicated to Jedwabne pogrom. – Photo: Adrian Grycuk,Wikimedia

“The Polish Justice Ministry is committed to not enforcing the new law before there is an in-depth examination of all of its components, including a discussion with Israeli representatives,” said Chodorowicz, emphasizing that the two countries would continue to discuss the divisive legislation.