As Arabs Barricade Their Borders, Condemnations Levied at Europe for Refusing Muslim Refugees 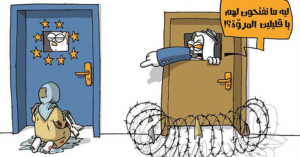 In Saudi Arabia, which refuses to allow in refugees, its media is criticizing Europe after Slovakia announced Muslims won’t ‘feel at home’ since they have no mosques, and Cyprus reported that it prefers Orthodox Christian refugees only.

More and more European countries have abandoned the continent’s famous policy of political correctness in recent days, and admit unabashedly: They are willing to take in only Christian refugees, not Muslims.

After Slovakia, the Czech Republic and Hungary, who all came out against taking in refugees, the great majority of which are Muslim, Cyprus announced on Monday that it was willing to take in 300 refugees – but wants them to be Christian. 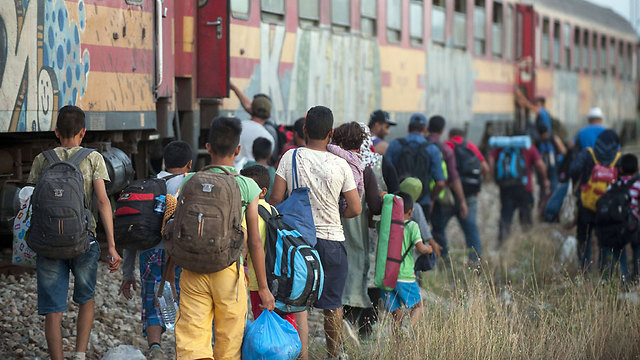 “We would seek for them to be Orthodox Christians,” Cyprus’ Interior Minister Socratis Hasikos told state radio. “It’s not an issue of being inhuman or not helping if we are called upon, but to be honest, yes, that’s what we would prefer.”

Over the past few weeks, several of the European Union members – primarily Slovakia and the Czech Republic – have said they do not want to take in Muslim refugees. 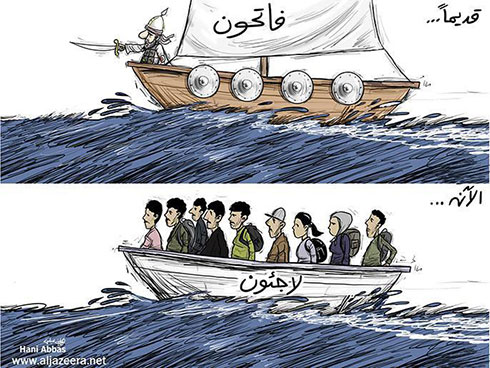 The Muslims once came to Europe as invaders, now they’re coming as refugees.

Hungary, one of the main opposers to the recent wave of refugees who are fleeing war zones in Muslim nations, expressed concern for the demographic situation in Europe if the continent opens its gates to tens of thousands of Muslim refugees. Hungarian Prime Minister Viktor Orbán warned that this would endanger the continent’s Christian cultural identity.

Slovakia shocked many at the end of August when it was the first to publicly declare it did not want Muslim immigrants inside its borders. An Interior Ministry spokesman, Ivan Netik, explained his country will not take in Muslim refugees because they “would not feel at home” there.

Netik claimed in an interview with the BBC that Slovakia was not implementing a policy of discrimination, but rather seeks to ensure the nation’s unity. 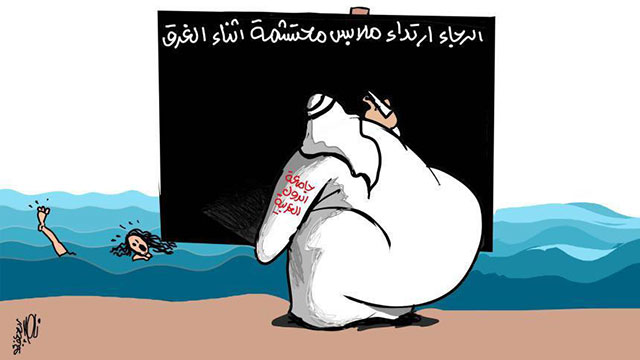 Criticism against the Gulf states and the Arab Leagues. The writing on the blackboard says: ‘Please dress modestly while drowning.’

“We want to really help Europe with this migration wave but… we are only a transit country and the people don’t want to stay in Slovakia.

“We could take 800 Muslims but we don’t have any mosques in Slovakia so how can Muslims be integrated if they are not going to like it here?” he said.

Last week, Slovakian Prime Minister Robert Fico warned that “If a mechanism for automatic redistribution of migrants is adopted, then we will wake up one day and have 100,000 people from the Arab world and that is a problem I would not like Slovakia to have.”

Two months ago, thousands protested in Bratislava, Slovakia’s capital, against the “Islamization of Europe” and against the European Union’s plan to implement binding quotas of immigrants for each country, including their own. 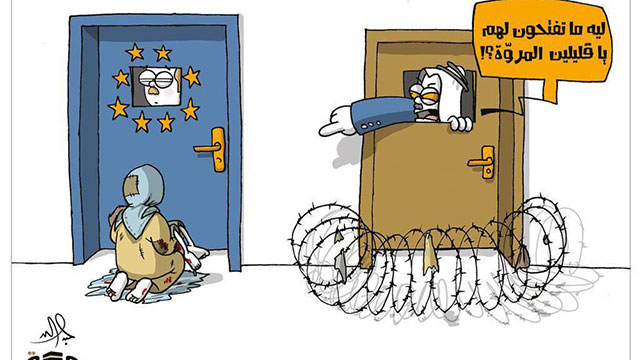 Arab caricature: Refugees knocking on Europe’s door, which doesn’t want them, as other Arab nations build fences and yell at Europe: ‘Why won’t you open the door for them?’

Local police reported that some protesters, most of them identifying with the radical right wing, tried to attack a smaller group of protesters in favor of taking in the refugees. Dozens were arrested and three policemen were hurt in the protest.

Meanwhile, there has been a lot of criticism in the Arab press on the distinction some European countries are making between Muslim and Christian refugees coming from Syria, Iraq and other countries.

Prominent Al Jazeera journalist Ahmed Mansour wrote on Twitter this week, “The refugee crisis has confirmed a very important fact – the fact European countries are sticking to their racist and crusader policies.” 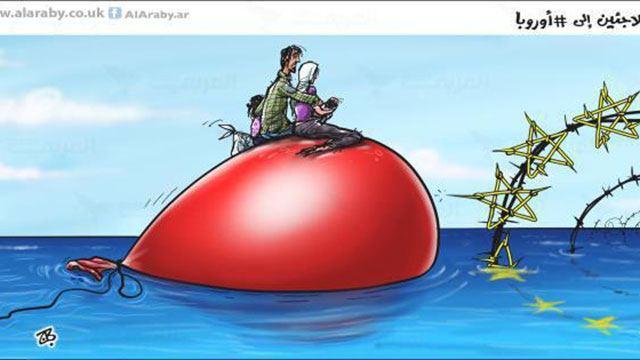 Arab caricature: Muslims are left to drown in the European’s obstacle course.

Even though the Gulf states have been harshly criticized for the fact that, despite their wealth, they were not taking in refugees from war zones, Saudi newspaper Sabq slammed the European countries, saying, “Children, women, and Muslim families were left to starve and drown on the grounds that they could not settle among the Europeans without mosques. A new human tragedy – Europe refuses to take in Muslim refugees and welcomes Christian and Buddhist refugees.”

After being rejected by European countries, some Muslim refugees entering Europe have converted to Christianity to increase their chances of receiving asylum, while others claimed they are converting because they lost faith in Islam after the horrors they experienced.