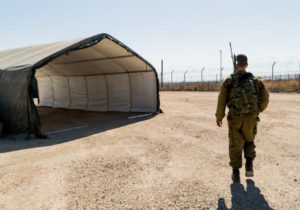 IDF closes it’s Golan Heights medical field clinic, the Mazor Ladach, that had provided treatment to some 6,800 displaced and deprived Syrians that had no access to medical help or medicines in their war-torn country.

A field clinic built by the IDF and providing care to injured Syrians has been closed, the IDF’s Spokesperson’s Unit announced on Friday.

The Mazor Ladach (whose name translates into Bandaging Those In Need) was a field clinic opened in August 2017 and located in an unused military post in the southern Golan Heights on the Syrian border.

This week the IDF began the process of dismantling and evacuating the clinic compound which acted as a day clinic in the framework of the activities of Operation Good Neighbors in cooperation with the Frontier Alliance International, an American humanitarian organization.

The clinic provided medical treatment for the locals from the Syrian Golan Heights, treating  some 6,800 Syrians.

WATCH: IDF trucks in tons of humanitarian aid in overnight operation to Syria

The IDF’s 210th Division helped train the staff and had the ability to grow to 16-18 doctors to provide care to over 500 patients per day. While it was not able to care for any wounded Syrians or those who may need surgery, it provided care similar to those provided in any medical clinic.

The compound’s security were a top priority during the building process and the military built a secure bunker for emergency staff in case of stray mortar fire due to the fighting right across the border.  Last October a volunteer physician working at the field clinic was hit by a stray bullet from fighting across the border. He received treatment in the field clinic after being lightly injured.

Since the outbreak of fighting in Syria, there has been a serious shortage of medical infrastructure, doctors and medicines on the Syrian side of the border. Faced with this shortage, the IDF acted to provide life-saving humanitarian assistance alongside non-intervention in internal fighting in Syria Operation Good Neighbor which was launched in June 2016.

The Israeli military has been providing among other things over 1524 tons of food, 250 tons of clothes, 947,520 liters of fuel, 21 generators, 24,900 palettes of medical equipment and medicine all while maintaining the principle of non-involvement in the Syrian civil war.

The Syrian army backed Russian airpower have been pummelling the southwestern provinces of Dara’a and Quinetra in an offensive aimed at recapturing the strategic areas bordering Jordan and Israel’s side of the Golan Heights from rebels and Islamic State group fighters.

In recent weeks the regime has succeeded in the offensive, coming closer to Israel’s Golan Heights, 1,200 square kilometers which Israel captured from Syria during the Six Day War in 1967 and unilaterally annexed in 1981.

“The IDF views the Syrian regime as responsible for everything that is happening in Syrian territory, monitors developments in the region and maintains readiness for a variety of scenarios,” read the IDF statement.