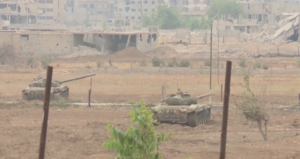 Fears have risen about the fate of the thousands trapped between infighting between the regime and armed groups such as Islamic State and Hayet Tahrir al-Sham, which captured most of the camp in 2015.

UNRWA has expressed shock at the destruction and human cost of the ongoing battle.

The regime had warned armed fighters in the camp that it would assault them this month. ISIS claimed many of its men had left, leaving HTS and other extremist factions behind to face the assault.

On April 19, the Syrian regime, and some allied Palestinian militia began to shell the Yarmouk neighborhood.

Once home to 160,000 people, it has been gutted and reduced to rubble over the last years as it was under siege.

Many of the Palestinians who once lived there have fled, but estimates noted that thousands still remained.

By Sunday, Al Jazeera estimated that 60% of the neighborhood had been taken by the Syrian army and its allies.

In addition, up to 3,500 Palestinians were able to escape the fighting, Al Jazeera reported.

For Palestinian refugees in the camp and those who fled over the last few years, this is only the latest round of suffering.

Krahenbuhl told reporters in Brussels at an international conference that “Palestinian refugees in Syria are a community that lives, for the second time in their large history, the trauma of displacement.”

Israeli MK Haneen Zoabi posted about Yarmouk on her Facebook page, asking: “Who can be silent in this time of people crying out?”

“Imagine the global response if Israel had done this. But it’s [the] Assad regime so let’s keep the focus on ISIS,” Jonathan Schanzer, senior vice president for Research at the Foundation for Defense of Democracies asked on Twitter.

The Syrian regime has used its usual methods of barrel bombs and indiscriminate fire with airstrikes and rockets against the concrete jungle of destruction that Yarmouk has become.

A once thriving suburb of Damascus, it is a heap of ruins. Asharq Al-Awsat, a London- based Arabic publication, described the suffering of a 55-year-old woman who had fled the camp and been reduced to cleaning homes.

“People are looking for food in the garbage bins,” she said.

Even those who managed to leave were being subjected to abuse by landlords in Damascus that took advantage of their vulnerable position.

The battle for the camp is part of the Syrian regime’s attempt to remove all the pockets of rebels and other armed factions from around the capital. After President Bashar Assad’s Russian backers met with Turkey and Iran in recent summits the war in Syria there was an understanding that in northern Syria the Syrian rebel-held areas around Idlib would be left alone by the regime. In exchange, the regime would concentrate on destroying eastern Ghouta and now Yarmouk.

The rebels in Ghouta were bused north to areas under Turkish and Syrian rebel protection. During that operation, a poison gas attack resulted in US, French and UK airstrikes.

In Yarmouk, the regime does not appear to be offering any chance for ISIS or HTS to leave because they are extremist groups that are not wanted in northern Syria. They also cannot flee south to Syrian rebel-held areas near Jordan because the rebels there are more moderate and do not want ISIS or HTS members.

According to Al-Manar, a TV network close to the Assad forces and Hezbollah, the regime has succeeded in cutting ISIS-held areas of Yarmouk in two pieces. Nevertheless, claims that the regime had taken 60% of the area seemed exaggerated, according to the map presented. It may take several weeks for the regime to take the entire area, leading to more civilian deaths.