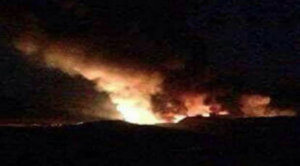 Reports by Syrian media say that the target of another “Israeli aggression” was an Iranian base in the Jamaraya region.

Describing it as “a new Israeli aggression,” Syria’s official news agency SANA said Israeli fighter jets flying in Lebanese airspace fired a number of missiles towards the area of Jamraya research center targeting an Iranian base.

While a number of missiles did hit their intended targets, several others were intercepted by the Syrian air defenses, the report said.

No information was given on damage or casualties.

The scientific research centre in Jamraya was established during the 1980s and is believed to be one of the most important research centers in the country, with weapons developed and stored there. An Iranian base has also been established in its vicinity, with several buildings which likely house soldiers and military vehicles.

A Google Earth view of a Syrian scientific facility in Jamraya, North-West of Damascus, before it was allegedly struck by Israeli warplanes in late January 2013. – Photo: Google Earth

According to the report, Israeli jets flying inside Lebanese airspace fired several missiles towards the al-Qutaifa area at around 2:40 in the morning, causing damage near the military site. A statement released by Syria’s General Command said several missiles were intercepted by the regime’s air defenses, which also hit one of the Israeli planes.

Israel was also reported to have fired two surface-to-surface missiles from the Golan Heights at around 3.04 a.m., and another four missiles from around the area of Tiberias. The Syrian army statement claimed all missiles were intercepted but some damage was caused as a result of the interception.

Israeli officials have repeatedly voiced concerns over the growing Iranian presence on its borders and the smuggling of sophisticated weaponry to Hezbollah in Lebanon via Syria, stressing that both are redlines for the Jewish State.

Following the briefings, Netanyahu said that while Israel wants peace, it is “prepared for any scenario, and I suggest that no one test us.”