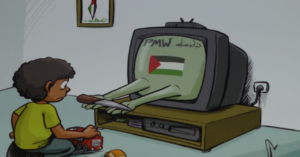 Efforts to get the page closed began earlier this year by the Jerusalem-based Palestinian Media Watch (PMW) organization, which appealed to Facebook CEO Mark Zuckerberg with the following message: “We strongly request that Facebook immediately close and delete Fatah’s Facebook page and ensure that no similar page is reopened.”

The letter was accompanied by a 45-page report (including addenda) that tracked Fatah’s Facebook activity last year. It showed how Fatah’s posts glorified mass murderers and other terrorists who were responsible for hundreds of murders, which include not only Israelis, but Americans and others.

Earlier this month, PMW published a second, similar report and launched a social media campaign, #CloseFatahFB. The watchdog then accused Facebook of being an accomplice to terrorism for its continued refusal to shut down the official Fatah Facebook page.

According to PMW’s CEO Itamar Marcus, the first report was not only reviewed by the social networking site, but Marcus had a 45-minute conversation with the director of Facebook’s global counterterrorism policy team, Brian Fishman, about its findings.

“During our conversation, I emphasized that every time Fatah posts a new terror message on Facebook encouraging violence or presenting murderers as role models, hundreds of thousands of Palestinians are given more motivation to kill Israelis,” Marcus told The Jerusalem Post. “Facebook still chooses to do nothing to stop it. Their willingness to ignore the role they are playing in Fatah’s terror promotion is incomprehensible. Whereas in 2018, Facebook was an unwitting accomplice in Fatah’s terror promotion, Facebook is Fatah’s partner by choice in 2019.”

In a release disseminated on Wednesday, PMW noted that the day before, Fatah posted three different items that appeared to center on PMW’s #CloseFatahFB campaign, though it did not refer to the organization itself. Fatah asked its followers to “support the page.”

Additionally, on Tuesday, Palestinian media accused the organization of “waging a war” against the page.

“The Israeli occupation is waging a new war against the Fatah Movement’s Facebook page,” the Ma’an independent Palestinian news agency reported. “The occupation is claiming that the page glorifies Palestinians that carry out operations against the occupation. We in Fatah are proud of our Martyrs, who defended their homeland and fought the gangs of murderers, who Israel glorifies.”

Marcus said that he believes the closing of Fatah’s page because of its terror mission is an important step in the war against terror.

“We certainly expect this to be a permanent closure and not a short-live suspension,” he said. “The more we can shut down terror supporting media, the more lives will be saved.

The Jerusalem Post reached out to Facebook to confirm why the page was shut down and is waiting for a response.

On Oct. 14, 2013 IsraelandStuff took part in a protest at Facebook headquarters in Menlo Park to demonstrate their lack of interest in curbing anti-Semitism or incitement to kill Israelis.

Having returned to Israel disgusted with Facebook’s unwillingness to even agree there was a problem, IsraelandStuff.com (on Facebook) expressed its disappointment with the following page banner for a few years.

Anti-Semitism and Incitement to violence flourishes on Facebook – Photo: IsraelandStuff/PP