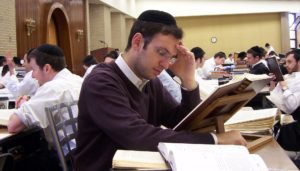 Although there has been an increase in ultra-Orthodox students entering academic institutions, an ultra-Orthodox man that has completed 19 years of yeshiva schooling is as prepared for the Israeli job market as a man who has completed only 10 years in the traditional public school system.

In a special report published Sunday the Bank of Israel looked at advancing the standard of living by increasing Israel’s productivity and determined that ultra-Orthodox men are under educated.

According to the report there has been since the 1970s, a decline in ultra-Orthodox boys’ schools teaching of subjects conducive to employment in the modern job market such as English, Mathematics and sciences and that the gap in this kind of education is never closed affecting the number of students achieving highschool equivalency or higher education.

A study conducted by the Taub Center for Social Policy Studies in Israel showed there is over the past few years, an increase in ultra-Orthodox students turning to academic studies but the numbers are still very low, and their choice of courses are not likely to help them in the job market.

The study concludes that these students must be directed to subjects such as English Math and comprehension if they are to succeed but goes on to say that there is no desire on the part of this community to study these subjects which they perceive as a waste of time.

An ultra-Orthodox man that has completed 19 years of schooling is as prepared for the Israeli job market as a man who has completed only 10 years in a non-Orthodox school system.

Dr. Neri Horowitz who was advisor to the ministry of Education on ultra-Orthodox studies said the rate of students dropping out of academic studies among this population is extremely high and can be tied directly to the lack of non-religious studies in the course of their schooling

The Bank of Israel’s report concludes the remedy to this adverse effect on the Israeli economy must be a political one.