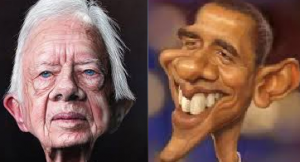 New information reported by the BBC details how Khomeini fooled Carter into helping him overthrow Iran, a close US ally, while deceiving the US public…. exactly how Obama was given ’empty promises’, forcing the US government lie to its constituents & allies, while Ayatollah’s gov’t reaps all the benefits. Iranian women by a poster of Ayatollah Khomeini – Reuters

From 1941 to 1979, Iran was ruled by Mohammad Reza Shah Pahlavi, better known as the Shah (meaning “king”). Pahlavi’s modernization and anti-Communist policies won the backing of many Western countries, which saw oil-rich Iran as a valuable ally in a tumultuous region. At the same time, though, his secularism and suppression of political opponents left him strongly disliked domestically.

The BBC now reports that Khomeini had made several overtures to US presidents, asking them to encourage the Iranian military to stand down and allow the uprising to succeed. In exchange, he promised to continue the warm relationship between the two countries.

The first message was sent to President John F Kennedy in 1963, but arrived only two weeks before he was assassinated. The next known attempt came in January 1979, as the Ayatollah prepared to return home from exile.

American officials in Tehran were already aware of the rumbles of discomfort and were looking for a way out of the situation, despite publicly supporting the Shah and Prime Minister Shapour Bakhtiar. “The best that can result, in my view, is a military coup against Bakhtiar and then a deal struck between the military and Khomeini that finally pushes the Shah out of power,” wrote Deputy National Security Adviser David Aaron.

The Ayatollah’s message arrived just as US officials were thinking of ways to quietly back the Islamists. The two sides began secret talks, which culminated in American assurances that it was not opposed to overthrowing the monarchy. For his part, Khomeini repeatedly promised that Iran would view the US as a friend and would continue selling oil to all countries except for Israel and South Africa. He even convinced the US that there was no need to remove its weapons, because the US military would still be welcome to operate in the country.

Despite the assurances, revolutionaries broke into the US embassy in Tehran and held 52 diplomats and civilians hostage for over a year. The Ayatollah proudly bragged about how Iran had defeated the “Great Satan,” and that “America can’t do a damn thing.”

The humiliation over the Iranian Revolution is widely cited as a major cause for Carter’s loss in the 1980 election.

Analysts have pointed out how well Khomeini succeeded in deluding the Americans. “Unlike Carter, Khomeini pursued a consistent strategy and played his hand masterfully. Guided by a clear vision of establishing an Islamic republic, the ayatollah engaged America with empty promises, understood its intentions, and marched toward victory,” the BBC notes.

While this information has only now been revealed to the public, it would presumably have been available to the Obama administration during last year’s nuclear negotiations with Iran. Though we are in a different century and Ayatollah Khomeini has been replaced by Ayatollah Khamenei, Secretary of State John Kerry and President Barack Obama regularly assured the public that Iran was negotiating in good faith and could be trusted, just as the Carter administration believed.

After the deal was signed, Deputy National Security Adviser Ben Rhodes admitted that the US government lied to its constituents and allies, and had been secretly preparing for a nuclear agreement with hardliners in Tehran.