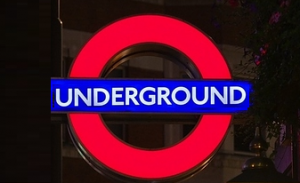 Around 500 anti-Israel posters are being removed from London Underground trains after sparking outrage that echoed all the way from the British capital to Jerusalem.

The posters were put up by pro-Palestinian activists as part of the annual “Israel Apartheid Week,” which began in the United Kingdom on Sunday.

A spokeswoman for Transport for London, the authority responsible for the underground “Tube” network, said the ads had been posted without authorization and constituted “an act of vandalism which we take extremely seriously.”

Some of the posters claimed that British-made weapons were used by Israel to “massacre” Palestinians during Operation Protective Edge during the summer of 2014. Other posters criticized the British security company G4S for operating in Israeli prisons.

Information about the posters reached the Israeli Embassy in London on Sunday, at which point embassy officials began working to have them removed. Foreign Ministry Director General Dore Gold, who happened to be in London, also took part in this effort.

“Since the government of Israel, as usual, did nothing, I talked to Johnson, a great friend of Israel, and explained to him that the State of Israel will not tolerate such things,” Lapid said.

Netanyahu later rejected Lapid’s claim of inactivity. “I spoke earlier with the Foreign Ministry director general and I asked him to demand that the British government have the posters removed,” Netanyahu said. “Whoever says we are not taking action is not telling the truth.”

Meanwhile, the Strategic Affairs Ministry held a two-day conference in Jerusalem on Sunday and Monday on anti-boycott efforts. There were 150 participants from 20 countries. “BDS activists are organized in a global network acting to isolate Israel,” Strategic Affairs Minister Gilad Erdan said. “Therefore, our goal is to set up a counter network of NGOs that support Israel. [This network] will deal with the lies [of the BDS movement].”

Erdan said that the Strategic Affairs Ministry will fund the hiring of ten people to work at important Israeli embassies around the world to fight the BDS movement.

Next week, Lapid and Yisrael Beytenu leader Avigdor Lieberman will hold an anti-BDS conference of their own. This marks the first case of political cooperation between the two and many in the Israeli political arena are now wondering if this means they will cooperate further in the future.