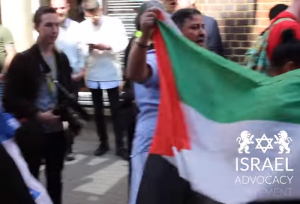 Humboldt University in the German capital lodged a criminal complaint against activists who disrupted a talk by MK Aliza Lavie and an Israeli survivor of the Holocaust in June, a spokesman for the university told The Jerusalem Post on Friday.

“Humboldt University in Berlin filed a written criminal complaint on June 27, 2017, in connection with the Internet complaint filed [via the police website] by the DIG [German-Israel Friendship Society] Berlin on June 26, 2017,” university spokesman Hans-Christoph Keller said.

The university’s criminal complaint, which appears to mirror that of the Friendship Society, involves allegations against BDS activists Ronnie Barkan, Majed Abusalama and Stavit Sinai, who face charges of trespassing for their activity at the Humboldt University event with Lavie.

The Boycott, Divestment, Sanctions campaign action by the three activists targeting the MK received widespread media coverage in Berlin because of the alleged antisemitic nature of the verbal tirades launched at the Israeli participants at the June 20 talk about “Life in Israel – Terror, Bias and the Chances for Peace.”

A spokesman for Yesh Atid’s Lavie told the Post on August 6 that the lawmaker “expects there will be some sanction against them, not only because of the offending behavior in this case, but mainly as a message against this type of violent discourse, whose consequences may be dangerous.”

It is unclear when the Berlin state police authority will conclude its investigation.

The police unit for political extremism is investigating the German-Israel Friendship Society complaint A female BDS activist, who is believed to be Sinai, can been seen on a YouTube video lashing out at the Israeli delegation.

She “swung [her fists] wildly around her and attendees” as she was escorted from the university room for disrupting the event, according to the Friendship Society complaint. She “continuously attempted to reenter the lecture hall and pounded on the door.”

The Israeli BDS activist Sinai is associated with the Center for Jewish Studies Berlin- Brandenburg.

A spokeswoman for the center, Dr. Kerstin Schoor, also declined to respond to Post queries.