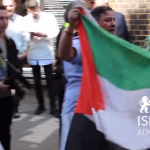 Humboldt University in the German capital lodged a criminal complaint against activists who disrupted a talk by MK Aliza Lavie and an Israeli survivor of the Holocaust in June, a spokesman for the university told The Jerusalem Post on Friday.