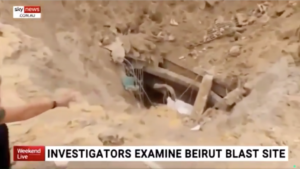 Incredible: while #Lebanon’s Army is denying the existence of suspicious tunnels around #Beirut port, Sky News broadcasts an alleged portion of one. pic.twitter.com/9HekLQVbpA

Yet Sky News did show a ceiling of a subterranean chamber and noted that people had hope that loved ones might have survived the blast in the tunnels. The Sky News report, which was posted online on Sunday, said the people excavating the site and searching for survivors “know there is a labyrinth of subterranean chambers here; they have discovered the opening of one of them.”

This comment appears to indicate that the search-and-rescue teams and officials know about these chambers.

For now, the question of the “tunnels” appears to feed stories that Hezbollah was using the area for illicit trafficking of weapons or munitions. However, the investigators who found the opening to one alleged tunnel were not wearing any kind of suits or using devices as if the area was full of unexploded ordnance. That means there didn’t appear to be a concern that they would find missiles and dangerous items inside these areas.

Nevertheless, the quick denial by Lebanon that these areas exist and the video of the subterranean chamber or “tunnel” seems to illustrate that Lebanon is still afraid to fully investigate the area for fear of finding the suspicious activities that those critical of Hezbollah allege were taking place here.

Hezbollah is known to have expertise in building tunnels and underground bunkers.