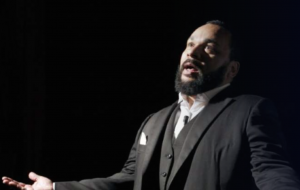 Dieudonne M’Bala M’Bala, whose father is from Cameroon, was not in court.

In March, a French court handed him a two months suspended sentence and fined him heavily for anti-Semitic remarks after he caused uproar by suggesting he sympathized with the attacks against satirical magazine Charlie Hebdo and a Jewish supermarket in Paris.

“I feel like Charlie Coulibaly,” he wrote on Facebook, a play on the slogan “Je suis Charlie” that became a global rallying cry against extremism and Amedy Coulibaly, one of the attackers.

The performer, who made his name in a double act with Jewish comedian Elie Semoun, is infamous for his trademark “quenelle” hand gesture that looks like an inverted Nazi salute but which he insists is merely anti-establishment.

French courts have hauled him up over a string of comments which opponents say are bluntly racist while supporters champion his right to free speech, even if it makes for uncomfortable listening.

He was due to appear in a French court Wednesday on charges of inciting racial hatred but that case was adjourned to February at the request of his lawyer.

The Liege case relates to a Dieudonne show there in 2012, and will be heard again on November 25.