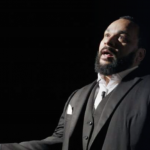 Dieudonne M’Bala M’Bala, whose father is from Cameroon, was not in court. Continue Reading »