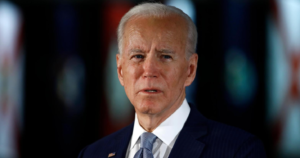 For the second time during this campaign, Joe Biden has broken a basic rule of American politics, never use the Holocaust or any of its related terms such as Nazis, or Hitler, for political warfare. In September, he compared Trump to Nazi propaganda chief Joseph Goebbels in a speech. Now he has used footage of Nazi dictator and mass murderer Adolf Hitler in a new campaign ad attacking President Donald Trump.

This move is offensive to Jews and anyone else who had relatives who suffered at the hand of the Nazis. It belittles the memory of the Holocaust and the suffering of the victims (some of whom were my relatives). It ignores lessons we should learn from that terribly dark chapter of history. 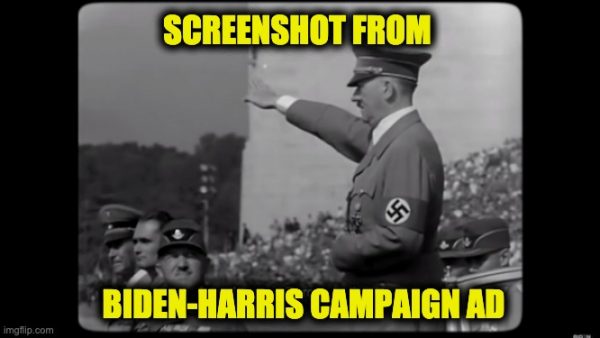 The effort appears to be an attempt to re-create will.i.am’s 2008 video, “Yes We Can,” which set a speech by then-Sen. Barack Obama (D-IL) to music.

Though the speech was delivered after Obama suffered a surprise loss in the New Hampshire primary, it had an electrifying effect on his campaign, inspiring activists to continue the fight.

One sequence in the video features archival footage of Adolf Hitler saluting a crowd in Nazi Germany. The crowd returns the infamous, chilling salute.

The Holocaust is a singular event in world history and not just because of its scale and inhuman horror. Yes, there have been, and sadly will be, other genocides of other groups. There have even been other atrocities against the Jewish people. But generally, a genocide is waged to suppress a group, keep them out of countries or politics, or take their land or some other economic reason. The Holocaust was different– the Jews targeted by Hitler and the Nazis had no land and held relatively little power–they were just hated. The Nazis took Jews from all over Europe and killed them.

Joe Biden has been in politics long enough to know this. To diminish the horrors of Hitler and the Nazis by trying to attack the President with that comparison is a smack in the face to Jews in America—it says he just doesn’t care.

Hitler’s Nazis killed six million Jews, one and half million of them children. In many cases, Nazis tattooed numbers on the arms of Jews, killed millions with poison gas then cremated their bodies. After the Nazis gassed their victims, they collected their hair, their clothes, glasses, gold teeth, and even artificial limbs to be used by the Reich.

Working for Hitler, Nazi Doctor Josef Mengele conducted horrible and painful medical experimentation on victims. He experimented on over 1,500 pairs of twins and other Jews and Gypsies, injecting dye into their eyes blinding them, or chloroform into their hearts killing them, he sewed twins together trying to create conjoined twins, forced people into freezing water, and perpetrated other experiments too horrible to repeat.

Are they mad? Did Donald Trump force people into gas chambers or conduct medical experimentation on people like Hitler? Did he kill millions and then have his people go through their bodies to recycle what was usable? To be cynical , if anything like hat happened, the MSM wouldn’t cover it up like they are covering up the Hunter-Joe Biden scandal.

Nothing is being done by President Trump, or anyone else in America that is remotely in the same universe as the Holocaust. Which means Biden’s use of Hitler in his ad is disgusting and a lie.

Just as important is that the use of Hitler footage demonstrates a lack of understanding or compassion for what happened during the Shoah (what the Holocaust is called in Hebrew). Along with a deficiency in intelligence. It proves he lacks the verbal agility to produce a decent comparison if he wants to denigrate Trump..

But then again, his promise to return to the awful JCPOA, Iran deal is an indication that Biden is not sensitive to the suffering of Jews.

Joe Biden owes an apology to the people who suffered at the hands of Hitler. their families, and the entire Jewish people.

Jeff Dunetz is editor/publisher of the popular blog “The Lid.” The political columnist for The Jewish Star, and co-host of the weekly radio show, Host of The Lid Radio show on SHR Media, and is a Leader At Large of Herut NA-the Unapologetic Zionists!