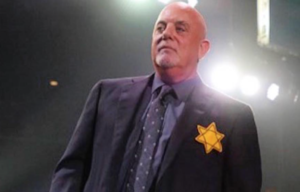 Joel was reportedly protesting the growing visibility of neo-Nazi and antisemitic hate speech in the United States – and the equivocation on the topic by US President Donald Trump. The star, of course, was a reference to the yellow stars Jews were forced to wear during the Holocaust. Joel, who grew up on Long Island, was born to two Jewish parents, and has described himself as culturally Jewish.

The singer took another shot at Trump during his show, by playing a slideshow of ousted White House officials while singing Patty Smyth’s hit song “Goodbye to You” – alongside the singer herself. Former strategic adviser Steve Bannon, former press secretary Sean Spicer and former communications adviser Anthony Scaramucci all appeared on the screen.

Predictably, the move garnered mixed reviews on Twitter, with some calling him a “true hero,” while others wondered if he’d “lost his mind.” Hassidic writer and activist Elad Nehorai called it “epic and brave.”

Compared to many big stars, Joel has been relatively quiet about the current political climate. In a Rolling Stone interview in June, he said he tries to “stay out of politics… I try not to get up on a soapbox and tell people how to think.” Nevertheless, he said, the election of Trump as president still has him “flabbergasted,” and proves that “all kinds of weird shit can happen.”