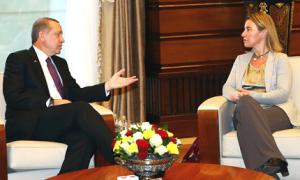 Even as it is trying — and currently failing — to placate Russia and alleviate tensions over the plane it shot down last week, Turkey secured itself a handsome victory in a different arena on Sunday, persuading the European Union to give it $3.2 billion and other benefits in exchange for stemming the flow of Muslim migrants threatening to flood the continent.

In addition to the cash, the EU will also give Turkey visas and promised to renew talks on joining the union.

After meeting with EU leaders in Brussels on Sunday, Turkish Prime Minister Ahmet Davutoglu called the deal a “new beginning” for the uneasy neighbors.

A key element of the deal is 3 billion euros ($3.2 billion) in EU aid for the 2.2 million Syrians now in Turkey. The money is intended to raise their living standards and persuade more of them to stay put, rather than attempt perilous crossings to the EU via the Greek islands.

The final offer of “an initial” 3 billion euros represents a compromise between the EU, which offered that sum over two years, and Turkey, which wanted it every year. Now the money, as French President Francois Hollande said, will be paid out bit by bit as conditions are met, leaving the total payout unclear.

“As Turkey is making an effort to take in refugees — who will not come to Europe — it’s reasonable that Turkey receive help from Europe to accommodate those refugees,” Hollande told reporters. He said the deal should also make it easier to check arriving migrants and keep out those who pose a threat, such as some of the Islamic State militants who struck Paris two weeks ago.

Also on offer to Turkey, which wants to revive relations with its European neighbors after years of coolness — and as it faces trouble in the Middle East and from Russia — is a “re-energized” negotiating process on Turkish membership of the EU, even if few expect it to join soon.

Many Turks could also benefit from visa-free travel to Europe’s Schengen passport-free travel zone within a year if Turkey meets conditions on tightening its borders in the east to Middle Eastern migrants and moves other benchmarks on reducing departures to Europe.

“Today is a historic day in our accession process to the EU,” Davutoglu told reporters on his arrival in Brussels. “I am grateful to all European leaders for this new beginning.”

Aware of a sense of desperation in Europe for a solution to a crisis that has called into question its own cohesion and the future of its Schengen zone, Turkish President Recep Tayyip Erdoğan has driven a hard bargain.

The deal involves Turkish help, including through naval patrols and border checks, in handling the flow of migrants to the EU, expected to reach 1.5 million people this year alone.

“Results must be achieved in particular in stemming the influx of irregular migrants,” a joint statement read.

Summit chairman and European Council President Donald Tusk stressed that the meeting was primarily about migration rather than improving Turkish ties, which have been strained in recent years as Erdoğan has used his powerful electoral mandate to consolidate his power. Critics say he has abused the rights of opponents, media and minority Kurds.

“Our main goal is to stem the flow of migrants,” Tusk said, insisting that “this is not a simple, trivial trade-off.”

The Europeans, none more so than German Chancellor Angela Merkel, are under pressure to manage the biggest influx of people since World War II, the bulk of them to Germany. The crisis has helped populist opponents and set nations against each other, straining the open internal borders of the EU.

Before the summit itself, Merkel met leaders of some other EU states that have taken in large numbers of refugees — Sweden, Finland, Austria and the Benelux countries — and said afterward they had discussed how they might resettle more of them directly from Syria rather than wait for families to reach the EU via dangerous smuggling routes across the Mediterranean.

She said they had discussed no figures. German media reports had spoken earlier of up to 400,000 Syrians being resettled.

Merkel forced the pace in securing a deal with Turkey, but it has left critics of Erdoğan’s human rights policies uneasy.

The German leader defended her stance, saying: “If we are strategic partners, we must of course discuss openly with each other those issues on which we have questions, concerns or criticism.”

Meanwhile, measures the EU has taken have done little to control migrant movements. While winter weather may lower the numbers for a few months, it is also worsening the plight of tens of thousands stuck by closing borders in the Balkans.

Sunday’s summit, called just days ago as Brussels tried to clinch a deal offered over a month ago, was complicated by Turkey’s downing of the Russian warplane on the Syrian border.

The incident has complicated European efforts to re-engage with Moscow, despite a continued frost over Ukraine, to try to advance a peace in Syria that could end the flight of refugees and contain Islamic State. Davutoglu will remain in Brussels for a meeting with fellow ministers from NATO.

Irish Prime Minister Enda Kenny said tensions between Ankara and Moscow over the downing of the warplane were of “enormous concern.”

The EU’s foreign policy chief, Federica Mogherini, said the incident should not affect the prospect of finding a political deal on Syria.