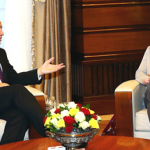 Even as it is trying — and currently failing — to placate Russia and alleviate tensions over the plane it shot down last week, Turkey secured itself a handsome victory in a different arena on Sunday, persuading the European Union to give it $3.2 billion and other benefits in exchange for stemming the flow of Muslim migrants threatening to flood the continent. Continue Reading »