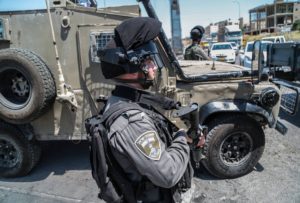 In a firefight near Israel’s southern border with Border Police forces, one smuggler is killed as large smuggling operation was foiled with dozens of kilograms of drugs and vehicle seized.
• No injuries were reported among Israeli security personnel.

Border Police thwarted a drug smuggling operation near the Israel-Egypt border overnight. One smuggler was killed during a firefight that erupted during the operation. No injuries were reported among the Israeli troops.

According to available details, the Israeli troops, following a lead provided by the Negev and Border Intelligence Unit on an impending drug smuggling operation, deployed in the northern part of the border.

The smugglers then fled the area. The Israeli troops were able to seize one of the vehicles, finding dozens of kilograms of drugs inside.

An hour after the incident, Magen David Adom emergency services paramedics were called to the nearby Tze’elim Base, after a man suffering from gunshot wounds was found on its outer perimeter. He was rushed to a nearby hospital but was pronounced dead soon after being admitted.

The police believe the man sustained his wounds during the border-adjacent gunfight and was left near the base by the other smugglers. He was most likely shot accidentally by the Egyptian smugglers, the police said.