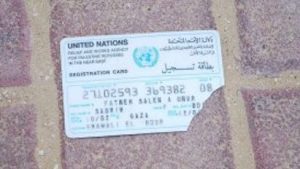 The Trump administration will in coming days reject the United Nations definition of Palestinian refugees and ask Israel to reconsider allowing the UN Palestinian refugee agency (UNRWA) to operate in the West Bank, an Israeli TV report said Saturday.

Washington will say that only 500,000 people can legitimately be considered Palestinian refugees, said the Hadashot report, which did not cite any sources.

Article 4 of the Hamas Charter

Under UNRWA’s definition, there are five million Palestinians eligible for its services, including those who fled what is now Israel in the war that surrounded its creation and their descendants.

UNRWA and the US State Department have been contacted for comment.

According to the TV report, the US government will “effectively” reject the Palestinian “right of return,” possibly the biggest sticking point in the resolution of the Israeli-Palestinian conflict.

Screen Shot UNRWA figgures for Palestinian refugees. As the numbers of those being assisted decline, the total continues to grow, and the budget demanded grows in kind.

Israeli governments of all political stripes have argued that acknowledging the “right of return” would lead to the loss of Israel’s Jewish majority and imperil its status as a homeland for the Jewish people.

The reported US policy shift comes just one day after the trump administration revoked the planned deployment of $200 million in economic aid to the West Bank and Gaza.

The move came after Congress passed the Taylor Force Act, which aimed to force the PA to terminate its “pay-for-slay” policies of paying stipends to convicted terrorists in Israeli jails and to the families of dead terrorists.

A senior State Department official said the decision was made “at the direction of the president” and that the sum would be spent in other parts of the world.

The move was slammed by the Palestinian leadership as “blackmail” and “bullying.”