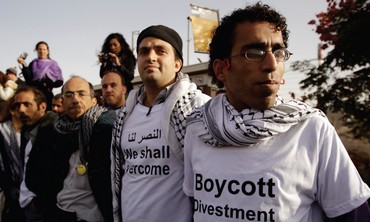 Local officials have called for the financial sanctioning of Brooklyn College for allowing the department to make such a definitive endorsement, though the college rejects that characterization of the sponsorship. New York Mayor Michael Bloomberg has come out in defense of the event, calling it an obvious exercise of free speech on campus.

“It’s the college coming out in support of a vicious, hateful group, plain and simple,” New York State Assemblyman Dov Hikind told The Jerusalem Post at the rally. “This isn’t about free speech. The issue is very simple: the sponsorship is inappropriate.”

New York police officers blocked off two areas of campus to accommodate opposing protests outside of the event, which was held in the campus student center. Over 60 protesters came out against the rally in a show of support for Israel, including alumni, concerned residents, members of the college’s Hillel and various local government officials.

“What this event means is that there’s a clear anti-Israel bias from the administration. And projecting that opinion on students is just wrong,” said Moshe Berman, a sophomore at the school and a Manhattan native. “If a department has to sponsor an event like this, the only way to do it properly is to present both sides.”

Opposite the pro-Israel rally was a smaller group of protestors calling for an end to the state’s existence, consisting of an odd mix of roughly half a dozen self-proclaimed socialists and roughly fifteen ultra-orthodox Hasidic Jews, chanting “from the river to the sea, Palestine will be freed.”

One Hasid yelled repeatedly that Zionism is not Jewish, to the applause of those waiting in line for the event.

“I think it’s ironic that Alan Dershowitz, a civil rights lawyer, would try to infringe on the right of free speech,” said Natalia Tylim, a member of the International Socialist Organization with no ties to the college.

Alan Dershowitz, a Brooklyn College alumnus and a contributor to this newspaper,  has condemned the endorsement while offering to speak at the event to provide an alternative perspective.

One student representative for the Students for Justice in Palestine group expressed concern that the event was being billed as anti-Semitic by large media outlets.

“It’s just a talk that’s meant to bring about public awareness,” said Sal Awad. “We’re not against Jews, at all. One of our speakers is Jewish. Jewish students helped organize this event tonight. This is about government policies, not the people they claim to represent.”

The Jewish speaker at the event, Judith Butler, was not available to press for comment.

“I come here as an Israeli, as a Jew and as a local concerned,” said Sara Michael, holding a sign with a blue Star of David. “These sorts of things just stir up a lot of hate. And they become dangerous when met with silence.”