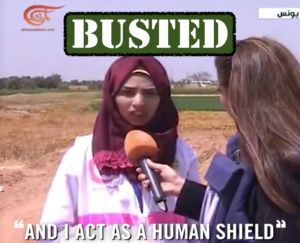 Razan Najjar was killed on Friday evening as thousands of Gaza rioters converged on the border.

Gaza health officials subsequently claimed that Najjar and other medics wearing white medical coats had approached the fence with their arms raised to evacuate injured rioters when she was shot.

On Tuesday, the IDF said that initial investigations of the incident found that Najjar had not deliberately been targeted by Israeli soldiers.

“During an initial examination regarding the incident that took place on June 1st, 2018, in which a 22-year-old Palestinian woman was killed, it was found that a small number of bullets were fired during the incident, and that no shots were deliberately or directly aimed towards her,” the IDF said.

This morning, Thursday, Arabic IDF Spokesperson Avichay Adraee tweeted a video which indicated that Najjar had actually played an active role in the riots.

Commenting on the video, in which Najjar is seen being interviewed and throwing a grenade, Adraee wrote in Arabic, “Razan Najjar is not the queen of mercy, as Hamas is trying to present her. She admitted that she served as a human shield for rioters, and this proves how Hamas exploits all members of Gaza society for its goals and those of Iran.”

“Do other paramedics around the world throw grenades and participate in riots, and call themselves human shields?” he asked.