The disintegration of Assad’s regime is changing the opinions many of his people have of the Jewish state, after more than 700 Syrians have received needed medical attention in Israel.

SOFIA, Bulgaria – Before protests demanding democracy broke out in Syria in 2011, ordinary Israelis had no meaningful contacts with ordinary Syrians.

The disintegration of the Syrian state has changed everything, including the view of many in the country toward the Jewish state. In interviews with The Jerusalem Post at two refugee camps in Sofia and in a hotel outside the city least week, Syrians expressed new perspectives on Israel.

“Israel is positive” because of its medical treatment of wounded Syrians on the Golan border, a man from Damascus, who declined to give his name, said. He thanked Bulgaria for its humanitarian help, pinpointing blame on the wealthy Gulf monarchy regimes as “countries that do not accept refugees.”

On a small scale, profound changes have created interactions between two peoples in a formal state of war. Col. Tarif Bader, chief medical officer for the IDF’s Northern Command, which provides vital health services to wounded Syrians, told the Los Angeles Times earlier this month, “We are saving the lives of our enemies.”

Israel’s government always had to deal with the regime in Damascus, but the populations were in the dark about each other’s lives and experiences.

In lively discussions about the complex power politics of the civil war with a group of Syrians in a hotel on the outskirts of Sofia run by the NGO Global Village Champions, Israel’s role in the region generated views breaking with the virulent anti-Israel ideology of President Bashar Assad’s regime.

Conversations debunking an anti-Israel narrative, which glued Assad’s people to his regime, are under way. Sultan, a soft-spoken refugee, told a room full of Syrian women and men that he witnessed Israeli soldiers on the Syrian side of the Golan border providing medical aid to two wounded Syrians. “Israel opened the border in August to take care of the Syrians… shot with bullets,” he said.

“Israel is better than Assad,” said Mahmoud, a refugee from Aleppo.

The discussions about the new Middle East – and the aspirations and hopes of refugees – unfold in an environment free from the fear that controlled Syrian discourse for nearly 70 years. Hossein, who made candies in a confectionery shop in Aleppo, weighed in, saying “Basher doesn’t support learning.” His 17-year-old son said he “hopes to become a doctor.”

Yank Barry, the Canadian philanthropist who heads Global Village Champions, has spearheaded the project that has breathed new optimism into the nearly 50 families staying in the hotel. Barry, who is endlessly energetic, told the Post he expects the number to increase to 68. Thirty children live in the hotel. 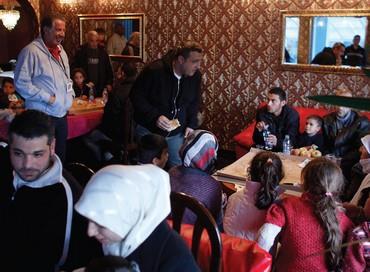 His work providing aid and housing to Syrians in Bulgaria has earned him the moniker the “Jewish Schindler.”

“These were children that had no life in their eyes. They were lethargic. Now they are active. You will see that we now have happy children.

That is the future of Bulgaria,” Barry said about the young Syrians in the hotel.

Many in Israel are eager for a rapprochement.

Hadas Ziv, public outreach director for Physicians for Human Rights-Israel, told the Post she had met five Syrians in Israel – four men and a woman.

“I don’t know what their impression was. For me, it was a good experience. I could not imagine meeting a Syrian before. My views were always they were people like me and it was always the government that makes the mess.”

The media have reported on Israeli medical personnel and Syrians developing bonds that would have been unimaginable a few years ago.

The ethical code of the IDF Medical Corps clearly states that soldiers must assist anyone who is sick or wounded – whether they are associated with the enemy or not.

There are question marks, however, over whether such changes are taking place on the side of Syrians. Majd Kayyal, an Arab Israeli who volunteers to help Syrians at Rambam Medical Center in Haifa, told the Post, “I don’t know if we can talk about a change of view in how these people [Syrians] see Israel.”

The Syrian patients are exposed to Israelis for only short periods (from two weeks to a month) in hospitals, he said. “They are not in a situation to make choices” because of their injuries, Kayyal said.

The human element continues on a grassroots level to build bridges between Syrians and Israelis, albeit on an very small scale.

More than 700 Syrians have received treatment in Israeli medical facilities since 2013.

The number is likely to significantly increase in 2014.

Syrians wounded as far north as the central city of Homs have managed to secure care in Israel. Dr. Michael Dor, deputy director of management at the Health Ministry, told the Post that Syrians are spreading the word about care in Israel.