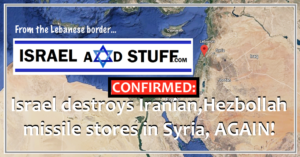 Israel fired missiles at a Syrian military air base in the country’s center late Sunday, killing at least one soldier and wounding two others, hours after another Israeli strike in southern Syria, which came in response to a rocket attack on the Israeli Golan Heights. Sunday’s strike killed three soldiers and wounded seven, Syria’s state-run media said.

Unconfirmed reports said Monday that five soldiers were killed in the strike, three of them Syrian.

According to Syrian media, the Israeli strike targeted the T4 air base in the central province of Homs – long used by Iranian forces in Syria – just before midnight Sunday. There was no immediate comment from Israel about striking the air base.

Syrian state TV quoted an unidentified military official as saying that one soldier was killed and two others were wounded in the strike and that an arms depot was hit as well. Israel has attacked the T4 base in the past.

Earlier Sunday, the IDF confirmed it targeted several military positions in southern Syria, including two artillery batteries, several observation and intelligence posts and an SA2 air defense unit, in response to two rockets launched from Syria late on Saturday, which caused no casualties.

Soon after the strike on Sunday morning, Prime Minister Benjamin Netanyahu confirmed he had ordered the strikes. “We will not tolerate firing into our territory and will respond fiercely against any aggression against us,” he said in a statement.

The Britain-based Syrian Observatory for Human Rights, an opposition war monitor, said Israeli aircraft struck positions and an arms depot belonging to Iranian troops and Hezbollah fighters. It said the attacks killed at least 10, including three Syrian troops and seven who were believed to be foreign fighters. Rami Abdurrahman, who heads the Observatory, said that “until this moment it is not clear if they were Iranians or Hezbollah members.”

Israel has acknowledged carrying out dozens of airstrikes in Syria against Iranian targets and Tehran’s allies over the past months.