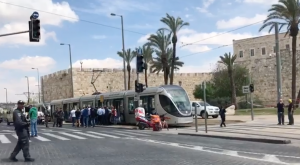 The attack took place inside a north-bound light train near the Old City’s Jaffa Gate just after 12:45 Friday afternoon.

Authorities say the murdered woman was roughly 25-years old. Paramedics attempted to stabilize her condition while she was transported to Hadassah Mount Scopus Hospital. Despite their efforts, doctors at Hadassah were forced to declare her death Friday afternoon.

The terrorist responsible for the attack has been neutralized and taken into custody. Police have identified the murderer as Jameel Tamimi, a 57-year old Arab resident of Jerusalem from the Ras al-Amud neighborhood.

“At 12:50, MDA Jerusalem region received a report of an [individual] stabbed near the Jerusalem light rail. MDA EMTs and paramedics are treating a severely injured individual,” an MDA spokesperson said.

Zeevi Hanfling, an EMT who responded to the attack, described the scene: “There were many people at the scene. Police officers led me into the train where a young girl was lying unconscious with stab wounds to her upper body. I provided initial life-saving medical treatment and performed CPR. An MDA intensive care unit arrived shortly after and proceeded to treat the critically-injured woman. We also treated a pregnant 30-year old woman and a 50-year old man who were also injured. We evacuated them to hospitals in light condition.”

Following the attack, a spokesperson from the Shin Bet internal security agency stated that the terrorist had a long history of criminal behavior and mental illness.

“The attacker attempted to commit suicide earlier this year by swallowing a razor blade,” the spokesperson reported. “In 2011 he was convicted of committing vile acts on his own daughter.”

“This is just one of many cases where a Palestinian suffering from personal issues… chooses to carry out a [terror] attack to find relief from his own problems.”