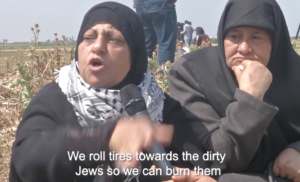 Czech Republic’s Foreign Minister issues uniquely honest statement for a European leader regarding the Gaza strip border violence, saying, “It’s also important to note…that Hamas habitually sends children to the riots’ focal points, so it could blame Israel for the deaths of children in front of the world.”
– Watch Video from Gaza

Czech Foreign Affairs Minister Martin Stropnický issued a public statement on his ministry’s website Thursday in which he said Hamas alone was responsible for the deaths of Palestinians during Gaza Strip border protests in recent weeks.

The partisan statement, titled “Gaza – Telling things as they really are,” could be said to be a rare occurrence for a European leader. In it, Stropnický wrote that “no country would reconcile itself to such provocations.”

There was no “causal relationship” between the transfer of the US embassy to Jerusalem and the violence near the border, the minister opined. “The relocation of the US embassy was thus only used by the terrorist organization Hamas… to exacerbate even further the events it had organized long before,” he said.

“The fact is that Hamas, which is also recognized by the European Union as a terrorist organization and which still does not recognize Israel, is the only true ruler of the Gaza Strip, and as such is fully responsible for the form and objectives of the violent actions that have occurred on the border between Israel and Gaza in recent weeks,” he continued.

“Attempts to break through the fence and infiltrate Israel could thus be construed as terrorism,” he stated. “Hamas even admitted that most of those killed were members of the group.”

Stropnický then went on to say that it was “plain to see how Hamas was treating Gaza’s populace. Hamas operatives burned the Gazan side of the Kerem Shalom crossing, through which humanitarian assistance is sent to Gaza.”

“It’s also important to note the minute detail that Hamas habitually sends children to the riots’ focal points, so it could blame Israel for the deaths of children in front of the world,” the Czech accused.

Minister Stropnický concluded by elucidating on his conclusion, that “Hamas simply does not care about the strip’s citizens or about improving conditions therein, and is more preoccupied with receiving as much attention from the international community as possible so as to sway its stance.”

“Such conduct will not improve the situation in Gaza and will certainly not contribute to settling the Israeli-Palestinian conflict. It’s time to call a spade a spade,” the statement announced.

Israel’s Ambassador to the Czech Republic Daniel Meron responded to the Czech statement, saying he “congratulated the foreign affairs minister for uncovering the truth regarding the sources of violence in our region.”

Stropnický’s statements, Ambassador Meron said, reflected the “special relationship between the two countries and the fact that Israel and the Czech Republic shared values and a common past.

Exactly 70 years ago, the Czech Republic assisted Israel in its War of Independence, and is now continuing to assist us in the war on propaganda.”

Czech President Miloš Zeman is considered an avowed supporter of Israel and was one of the first leaders in Europe to welcome US President Donald Trump’s recognition of Jerusalem as Israel’s capital.

Zeman also voiced his support this past December for moving his own country’s embassy to the Israeli capital, and attacked the European Union’s decision to speak out against Trump’s statement, an act he deemed to be “cowardly.”

The Czech president went so far as to say the embassy move will be happening “incrementally” during a reception for the 70th anniversary of Israel’s founding held last month at Prague Castle.