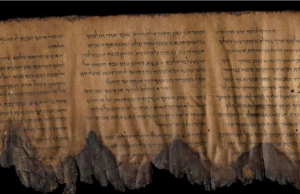 Complicit in the theft of religious heritage sites, UNESCO happily ascribed to the ‘Palestinians’, Christianity’s Church of the Nativity in Bethlehem in 2012; the agricultural terraces of Battir, site of the ancient Jewish fortress at Betar, in 2014; Judaism’s Tomb of the Patriarchs in 2017, but their most egregious abandonment of their responsibilities, in 2016 UNESCO ignored the Jewish connection to the Temple Mount and the Western Wall.

The next “prize” the Palestinians will likely claim as their own at UNESCO will probably be the archeological site of Qumran and its Dead Sea Scrolls, Shimon Samuels of the Simon Wiesenthal Center said on Wednesday.

He spoke at a panel on the denial of Jewish history in international organizations at the Foreign Ministry-sponsored sixth Global Forum for Combating Antisemitism in Jerusalem.

Samuels chronicled the Palestinians’ success at having attributed to themselves biblical and cultural sites, including Jewish ones, on the World Heritage List since joining the United Nations Educational, Scientific and Cultural Organization as a member state in 2011.

The World Heritage Committee ascribed to “Palestine” Bethlehem’s Church of the Nativity in 2012; the agricultural terraces of Battir, site of the ancient Jewish fortress at Betar, in 2014; and Hebron’s Tomb of the Patriarchs in 2017.

The Palestinian Authority has a tentative list of 13 additional sites it seeks to register at UNESCO.

Out of that list the Palestinians are next likely to seek cultural ownership of the Qumran Caves and Dead Sea Scrolls, said Samuels, who is the director of international relations for the Wiesenthal Center.

This request may come up at the next meeting of UNESCO’s World Heritage Committee this July in Bahrain, he told the conference.

But among the most tumultuous of issues since the Palestinians joined UNESCO have been its Executive Board’s approvals of resolutions that ignore Jewish ties to the Temple Mount and the Western Wall.

The text of what came to be known as the Jerusalem resolutions called those sites solely by their Islamic names of al-Haram al-Sharif and the Buraq Plaza.

Irina Bokova, who served as UNESCO’s director-general from 2009 until this past November, visited Israel this week and spoke at the conference and with The Jerusalem Post. She highlighted the steps she took to combat antisemitism, but acknowledged that she had failed to stop such resolutions, of which she has long been an outspoken critic.

The Bulgarian, who during her speech at the conference said that “probably one of the ways to save and protect” UNESCO would be to “depoliticize it,” diplomatically side-stepped the question of whether it was a mistake for the organization to accept “Palestine” as a member state in 2011.

“It was not me taking that decision, and I don’t think it is a fair question,” she said. “The director-general does not decide.”

Pressed, however, on whether admitting “Palestine” was good for the Paris-based body, she responded, “Well, we lost our [US] funding, and – at the end of the day – we lost two members of the organization.” Both the US and Israel have announced they will withdraw from UNESCO at the end of the year.

Bokova said the question of Palestinian membership is a political issue that is decided by the member states. She did admit, however, to a great deal of politicization in the organization, pointing out that this exists on other issues as well – issues not related to Israel.

Asked whether Israel overreacted in its response to UNESCO’s resolutions on Jerusalem, Bokova, who came out against her own body’s decision omitting the Jewish connection to the Temple Mount, said that the agency is about much more than just one issue, and “I have always thought that Israel has a lot to offer UNESCO, and through UNESCO to the world.”

She said she regretted that so much of the focus in Israel is on these types of controversial resolutions, while overlooking the benefits to Israel from the organization, including having a number of sites on the World Heritage list, and extensive efforts taken by UNESCO toward Holocaust education.

She also said that another argument she has used to try to get Israel and the US to remain inside UNESCO is that it is “among the most prominent UN agencies working against violent extremism.”

At the same time she acknowledged that resolutions such as the ones passed on Jerusalem represent a “mistaken approach.”

“I think the mixture between religion and politics is a very dangerous path, and unfortunately I think that is what happened,” Bokova said. “It was also an attempt to introduce elements that are not within the mandate of UNESCO, and that are more within the [purview] of the UN Security Council and others.”