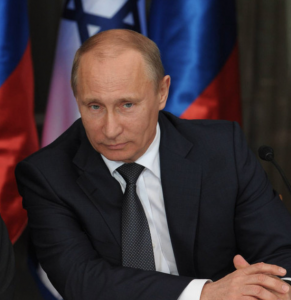 In an exchange with Dr. Moshe Vyacheslav Kantor, President of the European Jewish Congress, in the Kremlin, Putin reacted to reports of stark increases in anti-Semitic violence by stating that Jews “should come here, to Russia.”

“They left the Soviet Union; now they should come back,” he said.

In response, Kantor called Putin’s proposal a “a fundamentally new idea” that he planned on raising for discussion among European Jewish leaders at the EJC’s upcoming General Assembly, adding that he hoped that they would support it.

Kantor also came out in favor of Russia’s involvement in Syria, where it supports dictator Bashar Assad, stating that the congress “decisively supports the actions of the Russian Federation against Islamic State.”

“Why are Jews running from a Europe that was recently safe? They are fleeing, as you rightly said, not only because of terrorist attacks against our communities in Toulouse, Brussels, Paris, Copenhagen, and now Marseille, but because of their fear to simply appear in the streets of European cities,” Kantor said, citing research that indicated that anti-Semitic violence surged 40 percent worldwide in 2014.

A recent study in France indicated that forty 43% of that nation’s Jews were interested in emigrating.

Kantor complained both of “an explosive growth in nationalism, xenophobia and racism, with radical Right movements sprouting up like mushrooms” as well as “Islamic fundamentalism and extremism” in Europe.

“The continent has not outlived the age-old disease: during times of socioeconomic crisis, it is struck again by the virus of anti-Semitism. That is why the Jews who carry the ‘genetic’ memory of the horrors of the 1930s are leaving Europe,” he said.

Several days before the meeting Jonathan Arkush, President of the Board of deputies of British Jews, told the Jewish News website that he understood that Putin had called for the meeting.

“Our meeting was strikingly friendly,” Arkush subsequently said. “As someone with a background of activism in the campaign for Soviet Jewry I see the encounter as a clear sign of warming relations and trust between Russia and the Jewish people and Israel.  I do not believe it will be the last such meeting.”

Ukrainian Jews were less well disposed toward Putin’s call, however, with Eduard Dolinsky, who directs the Ukrainian Jewish Committee, telling The Jerusalem Post that “It’s like a call from Egyptian king for Jews to come back.”

Putin’s administration has consistently accused the Ukrainian state of anti-Semitism since pro-Russian President Victor Yanukovich was toppled in a popular revolution two years ago, leading to intense anger toward the Kremlin by many Ukrainian Jews who believe that they have been made into propaganda pawns in the ensuing conflict.

Noting that the meeting with Putin took place only weeks before Kantor is slated to run for reelection as head of the EJC, Dolinsky stated that he believed that the goal of the meeting was two-fold, “to show EJC members that he has support of Putin and show Putin that he controls European Jewish organization.”

“I think this trip and Kantor remarks about the Congress supporting Russia operation in Syria will cause a deep disagreement inside of EJC and European Jewish organizations.”