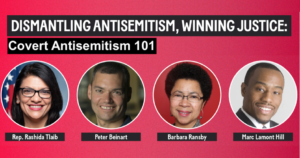 Group of anti-Israel Jews invites anti-Semites & anti-Israel activists to discuss how to be more effective in their anti-Israel criticisms without being labeled antisemitic. JVP’s December panel on antisemitism includes ‘token Jew’.

After an announcement that US Congresswoman Rep. Rashida Tlaib will participate in a panel on antisemitism along with others previously accused of antisemitic or anti-Israel statements, event host Jewish Voice for Peace is drawing criticism for their selection of speakers.

Louis Farrakhan supporter and Sharia law advocate Linda Sarsour (2nd from Right) stands with Rep. Rashida Tlaib (2nd from Let) holding a map where they have replaced the State of Israel with Palestine.

In addition to concerns over previous statements made by the participants, critics are concerned by the identity of the speakers, only one of whom is Jewish.

As a son of Holocaust survivors
my perspective is subjective

Tlaib, a Palestinian-American politician who has faced accusations of antisemitism and is known as a fierce critic of Israel and supporter of the Boycott, Divestment, Sanctions (BDS) movement, was strongly criticized on social media after tweeting a statement on Holocaust Remembrance Day (Yom Hashoah) that failed to mention Jews.

Marc Lamont Hill, also a panelist, has been accused of anti-Israel and anti-Jewish statements when he called for “a free Palestine from the river to the sea” in 2018 and described Mizrahi Jews as an “identity category” that had been detached “from Palestinian identity” in 2019.

Another panel participant, Peter Beinart, has said that he is willing to let go of the idea of a Jewish state, but says the new country could still be a “Jewish home.”. Beinart also wrote a column titled “Debunking the myth that anti-Zionism is antisemitic” in the Guardian in 2019.

Barbara Ransby, a historian, writer, activist and the fourth panelist endorsed the BDS movement in a column in colorlines.