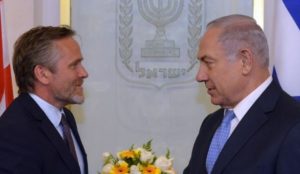 “It is important that there is confidence that Danish assistance is going for the right purposes,” said Anders Samuelsen, Foreign Minister.

Denmark says ‘No to BDS’ – Wikimedia/IsraelandStuff/PP

The move follows a review conducted by Denmark in May after Israeli Prime Minister Netanyahu provided Samuelsen with a list of organizations linked to Boycott, Divestment and Sanctions (BDS) campaign placing pressure on the minister to inhibit the funding of Palestinian NGOs with ties to anti-Israel incitement.

During the initial phases of the organization it was discovered that donations had been sent to the Women’s Affairs Technical Committee NGO but funds were quickly rescinded following the revelation that the organization had named a youth center after a terrorist.

Once the results of the investigation were revealed on Friday, the Danish Foreign Ministry publicly declared its freeze of financial support for the remainder of the year and affirmed that a more stringent criteria would be applied going forward.

The ministry however emphasized that a “high-priority” goal was, “to support civil society organizations focusing on the human rights situation in Palestinian”, which the Foreign Ministry asserted it would do.

Samuelsen described the announcement as a “significant achievement for Israel in its fierce struggle against the boycott organizations” that “promote boycotts”, “present a distorted picture of Israel” and “maintain contact with terrorist organizations.”

Israeli Minister of Strategic Affairs Gilad Erdan said this decision was, “a justified, welcome and required step. Palestinian NGOs that have links to terrorist elements promoting boycotts against Israel should not receive European government funding.”

“I call on other European governments to exercise the same moral responsibility and take similar steps,” Erdan urged.