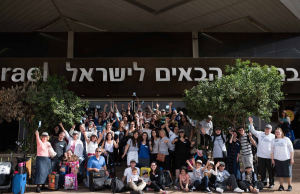 Undeterred by the latest wave of Palestinian violence, 65 Canadian and US Jews, aged 10 months – 83 years old, decided to make Israel their new home.

Despite the current wave of terror attacks against Israelis in recent days, which has the country on high alert and has seen civilians determinedly protecting themselves from knife attacks, 65 new immigrants (or Olim) from the United States and Canada landed in Israel yesterday (Wednesday) morning.

They came via El Al Israel airlines, on a Nefesh B’Nefesh (NBN) group Aliyah flight which was facilitated in cooperation with Israel’s Ministry of Aliyah and Immigrant Absorption, the Jewish Agency for Israel, Keren Kayemeth Le’Israel, and JNF-USA.

Among the passengers were five young men and women who are volunteering to serve in the Israel Defense Forces (IDF) as Lone Soldiers – those who immigrate to Israel without any immediate family and join the IDF. Twenty of the passengers are moving to Israel’s southern regions as part of NBN and Keren Kayemeth Le’Israel’s Go North and Go South programs that settle olim in Israel’s developing periphery.

“We are truly inspired that despite the extremely difficult times Israel is currently experiencing, Olim are undeterred and are still making Aliyah,” said Nefesh B’Nefesh Co-Founder and Executive Director Rabbi Yehoshua Fass.

“They are coming not only with the desire to build their homes and lives in Israel but to express that modern-day Zionism is thriving while displaying their deep responsibility towards the State of Israel and Jewish People.”

“Their choice to leave a comfortable life and move to Israel, and even more so in these times, is an important contribution to Israel’s strength and national morale,” Rabbi Fass continued.

“We are proud to accompany each immigrant through the Aliyah process and will use all means at our disposal to ensure their successful absorption and acclimatization to Israeli society.”