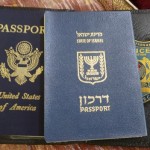 An American haredi’s citizenship request was denied based on an arrest for ‘interfering with a police officer’ and ‘disturbing the peace’ during a visit on the Temple Mount.

A resident of Jerusalem who applied for citizenship under the Law of Return, was stunned to find his citizenship application opposed by the Interior Ministry because he was previously arrested on the Temple Mount, an arrest for which he is currently suing the police, the Honenu legal organization reported.

A., a haredi Torah scholar from the US who has worked and and studied in Jerusalem for the past few years,and who married an Israeli woman and has Israeli children, was arrested two years ago when he ascended the Temple Mount on suspicion of interfering with a police officer and disturbing the peace on the Temple Mount. Continue Reading » 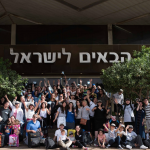 Undeterred by the latest wave of Palestinian violence, 65 Canadian and US Jews, aged 10 months – 83 years old, decided to make Israel their new home.

Despite the current wave of terror attacks against Israelis in recent days, which has the country on high alert and has seen civilians determinedly protecting themselves from knife attacks, 65 new immigrants (or Olim) from the United States and Canada landed in Israel yesterday (Wednesday) morning. 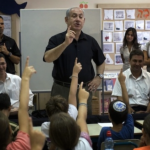 According to the Immigrant Absorption Ministry, of all the immigrants who moved to Israel over the past decade, 34,400 children will be attending an Israeli school this coming year.

The school year is set to begin in Israel on Tuesday, with more than 2 million children and teens poised to enter or return to the school system. Of them, a record number of 2,900 students will be attending an Israeli school for the first time, having immigrated to Israel this summer. Some 360 new immigrants will be starting school as Israeli first graders.

According to the Immigrant Absorption Ministry, the number of new immigrant students this year constitutes an increase of more than 50% over last year. Continue Reading »