Did the IDF quietly destroy a Hamas terror-tunnel in the heart of Gaza? 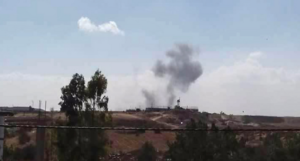 The IDF spokesperson’s unusual announcement regarding the last air strike in Gaza on ‘central terror infrastructure’ left many in Israel curious, since it may well imply an attack on a Hamas terror tunnel.

In light of the IDF Spokesperson’s unusual wording in describing on the IDF’s airstrike last night in Gaza, assessments are that the IDF attacked a terror tunnel belonging to the Islamic Jihad terror organization.

The Spokesperson had announced a strike on “central terrorist infrastructure in Gaza,” without providing details about the target.

The airstrikes followed three mortar attacks on southern Israel on Wednesday. The rockets exploded in open areas, causing no physical injuries or damages.

On Monday evening, terrorists fired a mortar from Gaza that exploded in an open area in the Gaza Belt region.

There were no physical injuries. The “Red Alert” incoming rocket siren was not activated before the mortar exploded.

Last Friday, Gaza terrorists fired three rockets towards southern Israel in the middle of an event marking the 24th birthday of kidnapped and murdered IDF soldier Oron Shaul, whose body has been held by Hamas since the 2014 Operation Protective Edge.

“The missiles fired on Friday proved once again that Iran, via rebellious, extremist terror organizations, is working to deteriorate the regional situation and playing with the lives of Gaza residents,” the IDF Spokesman said.

“This may cause an escalation in the Gaza Strip, after years of quiet and security. Hamas bears full responsibility for the current situation and its consequences.”

Yesterday, it was reported that the IDF completed an investigation into last Friday’s shooting attacks.

According to the investigation, the rockets were standard Iranian weapons similar to those fired on November 30 by the Islamic Jihad at an IDF post in the northern Gaza Strip.

This, along with the fact that the attacks coincided with birthday celebrations for captured soldier Shaul, led the defense establishment to estimate with high probability that this time too, the rockets were fired by Islamic Jihad, the second largest terrorist organization in the Gaza Strip – supported and funded by Iran.